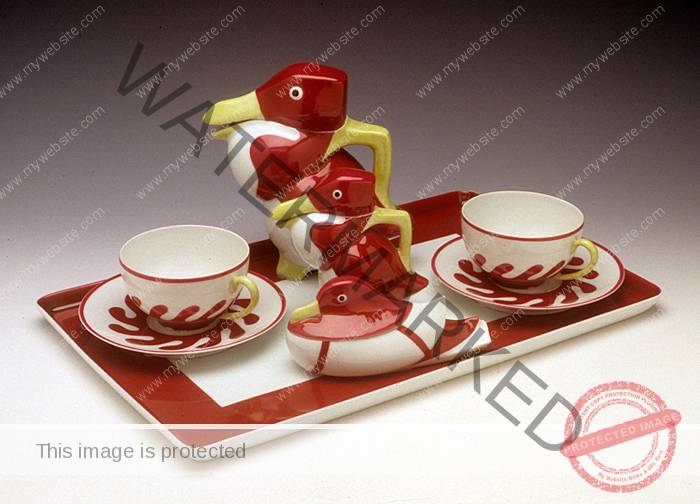 This tea set, designed by Édouard-Marcel Sandoz, is one of many tableware sets designed by popular artists for the porcelain manufacturing company Theodore Haviland, Limoges.

Theodore Haviland, Limoges was one of several porcelain manufacturing and retail companies operated by the Haviland family in the 19th and 20th centuries.

Prior to this, David Haviland was a partner in D.G. & D. Haviland (later called Haviland Brothers & Co.), a porcelain importer in the United States. In 1841, David moved to France in order to select porcelain tableware for this business. He settled in Limoges, a town 200 miles south of Paris, which is in a region known for its kaolin-rich clay and the site of several porcelain-manufacturing companies.

In 1847, David Haviland opened a porcelain-decorating workshop in Limoges, and in 1855, received a permit to build a manufacturing facility. The Limoges factory began producing porcelain tableware soon after with the help of the French porcelain company Pillivuyt. The Haviland Limoges factory was highly successful in its first two decades, and sold traditional styles of tableware with hand-painted floral patterns in subdued colors, as was popular in England and the US at the time.

The Haviland family continued to own Haviland & Co. until 1981, when William Haviland, Théodore’s son, retired and sold the company.

Throughout their history, the Haviland manufacturing companies hired well-known artists to design and create their products.

In 1873, Charles Haviland established an experimental ceramics workshop in Auteuil, a suburb of Paris. From 1873 to 1881, Félix Bracquemond, an etcher and impressionist painter, was employed as the manager of this workshop, and hired many Paris-based artists to create impressionist and Japanese-inspired styles of pottery. When Charles Haviland took over the management of this workshop himself in 1881, he continued this practice of hiring artists working in these styles.

In 1979, US First Lady Lucy Hayes commissioned Haviland & Co. commissioned to design a full set of dinnerware for the White House. The set was completed in 1880, and featured images of American wildlife drawn by Theodore Davis (1840–1894), an illustrator for Harper’s Weekly.

After his company split from Haviland & Co., Théodore Haviland also recruited several artists from the Auteuil studio to work for his company. Théodore also hired artists working in other popular styles, and sold tableware in art deco and art nouveau designs.

Sandoz was born and educated in Switzerland, though he spent much of his artistic career in Paris. He was known primarily for figurative sculptures in bronze, ceramics, and cut stone, which most often featured animals in either realistic or stylized forms. He was active in many professional societies, including serving as chairman of the Baron Taylor Association, a mutual-aid society for artists, for thirty years. He also served as director of the Charitable Society for Children of Artists, and founded the French Society of Animalists in 1933.

Sandoz produced several whimsical designs for Theodore Haviland, Limoges. This tea set incorporates two of Sandoz’s earliest designs for Haviland—a bonbonnière or sugar dish in the shape of a mandarin duck, and two sizes of Haviland’s “duck jug” (also called a penguin in Sandoz’s sketches and notes), which is used here as a teapot in the larger size, and as a cream jug in the smaller size. Sandoz also designed several cups and plates with the wave design seen on the teacups and saucers of this tea set. A Haviland tea set with this same design appeared on the show Antiques Roadshow in 2002.

In addition to this tea set, The Kamm Teapot Collection also includes a pitcher in the shape of a parakeet, which was designed by Sandoz for Theodore Haviland, Limoges.

The Edouard & Maurice Sandoz Foundation has an extensive collection of images of Edouard Sandoz’s sculptures, which can be browsed online.

Special thanks to Eugenie Fornier at the Frick Art Reference Library for assistance researching this work.