By Kamm Teapot Foundation on July 29, 2014 in Paintings, Prints & Photos 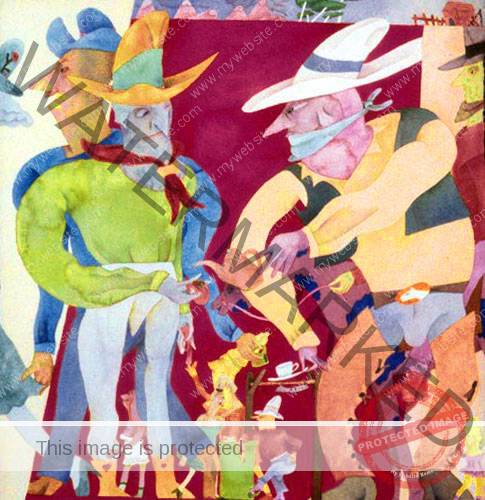 This painting is by the contemporary American artist Gladys Nilsson, who is known for her colorful, often surreal figurative watercolor paintings. She currently teaches painting at the School of the Art Institute of Chicago (SAIC). During the 1960s and 70s, Nilsson was a part of a loose collection of artists called the Chicago Imagists, or The Hairy Who.

Chicago Imagist’s work often incorporated figurative imagery, surrealist or metaphysical elements, whimsy, and references or styles from popular illustration or cartooning. The artists considered part of this movement consisted mainly of those exhibited and curated by Don Baum at the Hyde Park Arts Center during this time, including shows with the names “Hairy Who?”(1966, 1967, 1968), “The Nonplussed Some” (1968), “Chicago Antigua,” “Marriage Chicago Style,” and “Don Baum says: ‘Chicago Needs Famous Artists'” (1969).

The “Hairy Who” shows were organized by a set of artists from the SAIC, who chose the name for themselves as something of an inside joke. The artists in this show included Jim Falconer, Art Green, Gladys Nilsson, Jim Nutt, Sue Ellen Rocca, and Karl Wirsum. Nilsson and Nutt later began teaching children’s art classes at the Hyde Park Arts Center, and then later married.

This painting incorporates many distinctive aspects of Nilsson’s painting style, including figures with elongated, wavering body parts, bright colors, and impossibly overlapping foreground and background elements, as some of the small figures at the bottom of the image appear to be both in front of and behind objects in the foreground. The unusual, dreamlike subject matter is also similar to other works by Nilsson, depicting a scene of several male cowboys talking to scantily clad women, with three large cowboys in the foreground holding teacups, with one holding a teapot in one hand and tilting it to pour into the up of another, and another smaller cowboy in the background next to table with another teacup and saucer. The title of this painting is a pun on “foursies,” a term Nilsson uses to describe her ritual of meeting at four o’ clock for drinks with her neighbors, and also references the popular Earl Grey style of black tea.