By Allie Farlowe on October 30, 2017 in Metal Works, Teapots 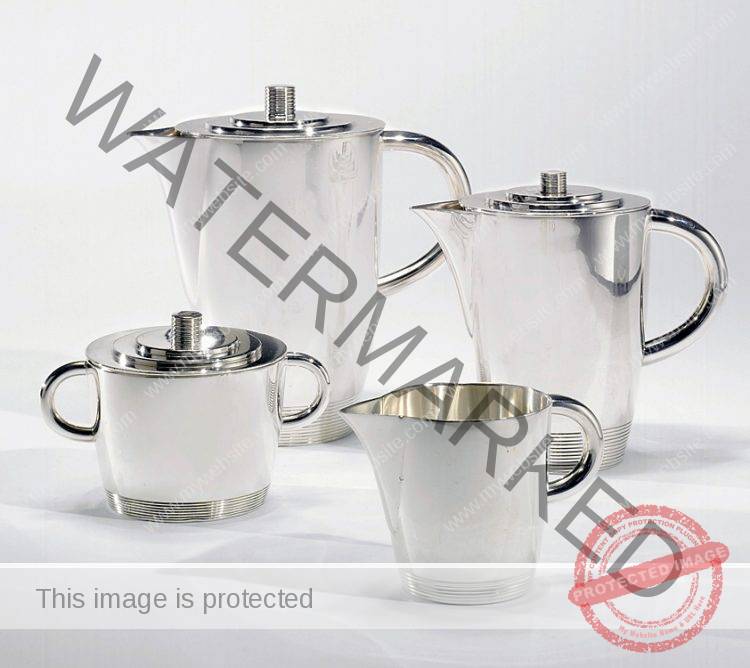 Lurelle Van Arsdale Guild accomplished more in one lifetime than most would attempt in seven.[1] Guild was an avid collector of antiques, a successful illustrator, an accomplished writer, an amateur architect, and most importantly for our purposes here, an industrial designer.

Guild had an immense impact on American industrial design in the twentieth century. He was a member of the first generation of industrial designers who entered the business in the 1920s. These pioneers were known for their larger than life personalities, their salesman-like demeanors, their understanding of business practices, as well as their desire to succeed. During Guild’s forty-eight-year career, he amassed a client roster that read “like a “Who’s Who” of American industry.”[2] He is credited for producing thousands of products from lipstick containers to locomotives. In 1936, Guild received national attention in a Forbes magazine article. The expose stated, “Of the thirty odd recognized designers in the United States, ten have big names and five are outstanding. These five− [Henry] Dreyfuss, [Norman] Bel Geddes, [Lurelle] Guild, [Raymond] Loewy, and [Walter Dorwin] Teague are by no means the only prominent designers, but they have produced the bulk of the significant work to date.”[3]

Lurelle Guild Associates, which opened around 1930, was based in New York City. The firm maintained a modest sized staff that resembled a second family.[4] Guild sustained this intimate environment possibly because it allowed him to have constant contact with the firm’s activities and to do what he loved most, design.[5] Guild’s office differed greatly from that of Walter Dorwin Teague or Raymond Loewy. Both men distanced themselves from the design process, hiring draftsmen to get the job done. Loewy envisioned the industrial designer’s office as “really a clinic − a place where products [were] examined, studied, and diagnosed.”[6] Conversely, Guild believed in “rolling up [his] sleeves and going to work.”[7] In his opinion, designers should really design.[8] “What,” he asked in a 1943 interview, “would you think if you went to a famous surgeon with a cataract on your eye, and he turned you over to his bright assistant for both the diagnosis and the operation?”[9] Guild did not believe in “bedroom designers who [created] attractive, but often impractical designs, or men who [built] great reputations as designers and became merely contract and idea men, leaving actual work to the office staff.”[10]

During the early 1930s Guild began working for the International Silver Company. International Silver was founded in 1898 by more than a dozen silver makers working in the Meriden, Connecticut area. The company’s roots dated back to tin ware peddlers, who roamed the northeast in the early nineteenth century.[11] For International Silver, Guild developed lines of tableware and giftware that were on occasion called Guildware. These were simple silver-plated designs with bands of reeding or ribbing. In some instances, Guild elongated the forms or incorporated colorful enamels. Advertisements described these products as being the “epitome of smart simplicity” as well as the “last word in elegance for contemporary and period backgrounds.”[12]

Within the Kamm Teapot Collection, there is an elegant example of Guild’s work for International Silver Company. This four-piece silver-plated set includes a coffeepot and a teapot, both containing lids, as well as a lidded sugar bowl and a creamer. These are cylindrical forms with uncovered triangular spouts and simple c-shaped handles. Ribbing encircles the bottom portion of each container and is incorporated on the finials. The entire set has a highly polished smooth surface.

This four-piece set epitomizes Guild’s approach to design. Guild did not pretend to be a visionary, nor did he want to solely recreate the past. Instead he consistently strived to create up to the minute designs that struck a balance between modern and traditional styles. As the designer, George Nelson stated in a 1934 issue of Fortune, Guild was “never ahead of his time or behind it.”[13] He simply understood that “not everyone is going to have a ‘modern’ house; there will continue to be people who will want, and will have period houses, period furniture.”[14] Coffee and tea sets like this one, could “adapt to [a family’s] needs and means” as well as an individual’s personality and “ideals of comfort and beauty” no matter the setting or environment.[15]

Throughout Guild’s career, he was regarded as one of the top industrial designers in the United States. Today, many scholars tend to overlook Guild’s contributions, placing emphasis instead upon his peers. A comprehensive history of twentieth century American industrial design should include Guild and his work. Lurelle Van Arsdale Guild was one of the most prolific designers of his time. He created splendid works such as this tea and coffee set in the Kamm Teapot Collection.