By Allie Farlowe on December 13, 2017 in Ceramics, Teapots 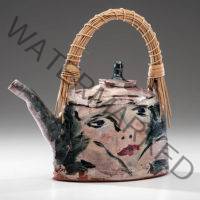 I remember being captivated by Ron Meyers’ cups, platters, and covered jars as a child. The imagery that danced across the surface of his forms stirred my imagination. Initially his fish, rabbits, birds, and gestural human faces grabbed my attention, but then the forms themselves, alive and expressive, made an impact.

Over the past fifty years Meyers has created a vast amount of work that has been tremendously influential to generations of ceramic artists. He is known for his utilitarian, wheel-thrown, earthenware and stoneware vessels that feature a cast of painted or carved animal and human characters. These are spontaneous works that embrace imperfection and playfully utilize line and color. Meyers credits his early interest in cartoons as a source of inspiration as well as Japanese Shino wares and English slipware of 16th through 18th centuries. However, as I examine one of his pots, I am always reminded of the Abstract Expressionists, particularly the paintings of Willem de Kooning or the sculpture of Peter Voulkos.

I have known Meyers for many years. My father, like Meyers, was a professor in the art department at the University of Georgia. However, not until recently did I fully grasp this artist’s devotion to his material of choice, clay. It all began with the decision to take a ceramics class while working on his Masters of Science in art education at Buffalo State Teachers College.[i] That class proved to be a turning point for Meyers. He says, “I was smitten.”[ii] “I got hooked on the feel, the process, and the physical-ness of the material.”[iii] From there, he doggedly pursued additional interaction. In 1967 he received a Masters of Fine Arts degree in ceramics from the School of American Craftsmen at the Rochester Institute of Technology. Following graduation, he accepted a teaching position at the University of South Carolina and in 1972 he joined the ceramics department in Athens, Georgia. What I think is important to understand about Meyers is that from his earliest days in the studio, he has continued to push himself and his work. He was determined when faced with criticism and continues even today to log in long hours. It has been stated that perhaps this work ethic and drive comes from his blue-collar roots in Buffalo, New York. Certainly, that could be so, but a passion also drives his persistence. My father used to say that in order to be an artist you must work. Ron Meyers truly lives by this motto. For him it is a joy to work in clay and the next great pot could be right around the corner.[iv] 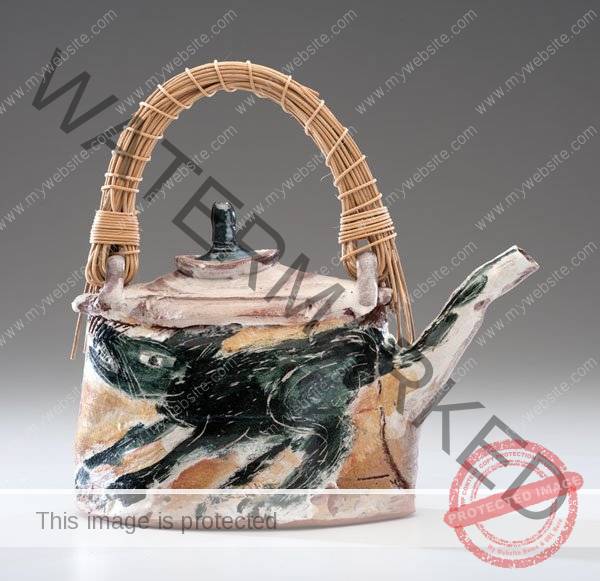 Within the Kamm Teapot Collection there is a dynamic earthenware work by Meyers. This is a flattened oval-shaped structure with slightly canted walls. A hand-woven rattan handle, with loose ends, attaches to the top of the form and a long, slightly bent, tubular spout extends from its body. The surface, which is slip-painted with underglazes, contains a couple of Meyers’ “usual suspects.”[v] On one side of the pot there is a woman’s face. She is striking with blue eyes, red lips, and a pale fleshy appearance. On the opposite side there is a lively, dark green dog on a light background. A small blue lid with a tall cylindrical finial rests on top. The teapot is made from earthenware clay that comes from the Ocmulgee River which runs through central Georgia. Meyers began working with low-fired earthenware instead of stoneware in response to the energy crisis of the late 1970s and early 1980s. He says that he “settled” on the Ocmulgee River clay because of its “textural qualities, its color, and its overall workability.”[vi]

As previously mentioned Meyers has found inspiration in Japanese Shino wares and English slipware of the 16th through 18th centuries. As you study works, such as this teapot, this influence is evident. Meyers first encountered examples of Japanese Shino in 1970 at the Royal Ontario Museum of Art in Toronto. A 16th century water ewer was particularly memorable. He says, “it had a crooked spout, finger marks, a drippy, grazing glaze, a handle slightly askew…It seemed to revel in its blemishes and technical faults.”[vii] Meyers felt a “kinship” with this form and states that “it was the spirit or approach…that I was after.”[viii] As for the English slipware, he began studying these works as he became more immersed in surface treatment. Meyers was drawn not only to the variety of useful objects that were created, but also their “playfulness and sense of humor.” He says that “these pieces had a naïve quality, lack of pretense, no-guilt approach…it was this attitude…that I wished to adopt.”[ix] Meyers’ interactions with these historical works was profound, nonetheless his pots embody his own creativity and vision.

In a 1995 interview Meyers stated that his imagery “…slowly grew into an obsession. An obsession in the sense that [he] was simply trying to get them right: the line quality, the gesture, as well as how they fit and activate the form.”[x] Today I expect Meyers faces new challenges as his work has evolved. Yet, he will continue to garner widespread attention. People are drawn to his works, such as this teapot in the Kamm Collection, for their distinctive, spontaneous, painterly, playful qualities as well as their usefulness. For his dedication as a teacher and the creation of a thoroughly brilliant body of work, Ron Meyers will continue to have a lasting impact.

McCauley, George. Ron Meyers and the Usual Suspects. 2012. (Film available on You Tube)

[i] Buffalo State Teachers College is now called Buffalo State College. It is part of the SUNY (State University of New York) system.