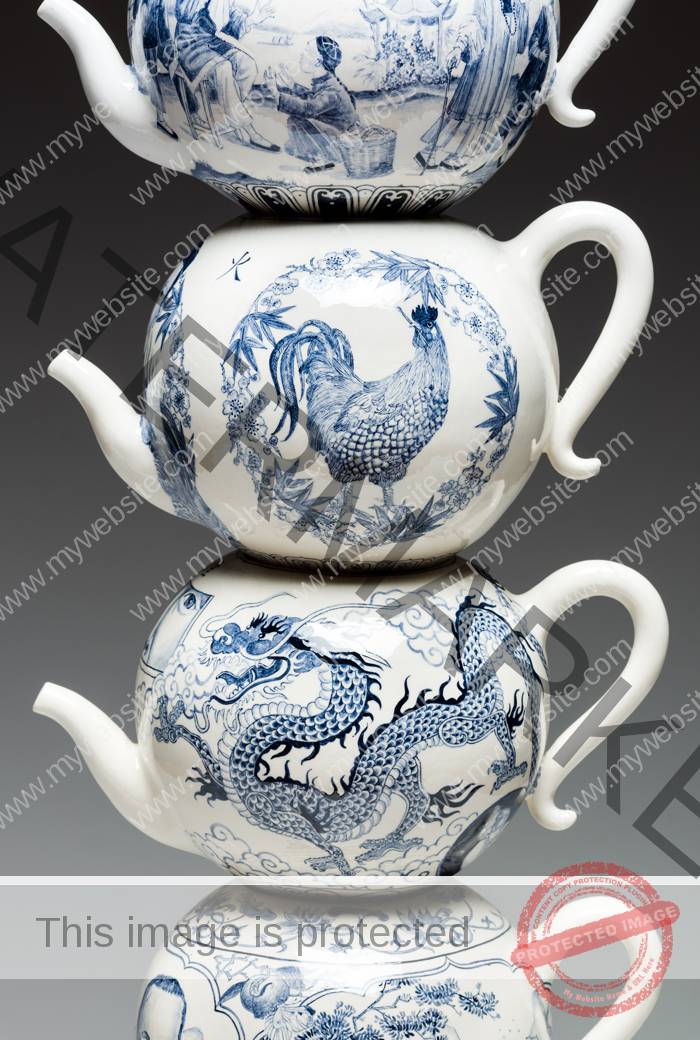 This teapot sculpture is by the contemporary ceramics artist Laura, or “Red,” Weldon Sandlin. Sandlin was born in Owensboro, KY, and now lives and works in Decatur Georgia. She began her artistic career as a graphic designer, and switched to clay after taking a ceramics class. Since then, she has been largely self-taught. Sandlin’s ceramic sculptures are based on children’s literature, and often incorporate images from the stories, as well as text and wooden models of books. Most of her sculptures also incorporate the form of a teapot, which is both a nod to the history of ceramics and a metaphor for the creation and consumption of stories.

This sculpture is based on the American children’s story book The Five Chinese Brothers by Claire Huchet Bishop, published in 1938. This book, which itself was based on a Chinese folk tale, The Five Brothers (or The Eight Brothers, The Nine Brothers, or The Ten Brothers, depending on regional and historical variations), tells the story of five identical brothers, each with a different superpower.

In the story, the eldest brother accidentally kills a young boy, and is sentenced to death. Before his execution, the eldest brother gets permission to return home to say goodbye to his mother, and then the next oldest brother returns in his place, only to survive the execution using his superpowers. This pattern repeats until all four younger brothers have survived a different method of execution, and village decides he must be innocent because he cannot be killed, believing all five brothers to be the same person. The brothers return home to their mother, and live happily ever after.

In this sculpture, each teapot represents a different brother in the story, though the numbers on each teapot do not correspond to the order of the brothers in the story. The top teapot shows the oldest brother swallowing the sea, which is his special ability. The next highest teapot shows the second oldest brother surviving execution by decapitation with his iron-like neck. The third highest teapot shows the fourth brother, who was impervious to flames, standing in fire and holding a rooster. The fourth teapot shows the fifth brother, who could hold his breath forever, surrounded by billowing smoke and a dragon. The bottom teapot shows the third brother surviving drowning by stretching out his legs to stand on the floor of the ocean, and has a pair of legs coming out of its base, wearing pants decorated with pictures of fish and flowers. The structure is also held together by a metal rod on the inside, which goes through all five teapots and the head, which represents the iron neck of the second brother.

The base of the sculpture features a portrait of the mother of the five brothers, and the base is set on a painted wooden book, which says “The Five Chinese QuinTeapots.” On the back of the base, there is a picture of a bird, holding a paper note which says “True nature is revealed in times of difficulty.”

Sandlin said that the key to putting the idea together for this sculpture was her discovery of a Chinese euphemism: in describing a new baby boy, they say “your teapot has a spout.”