By Kamm Teapot Foundation on August 22, 2017 in Ceramics, Teapots 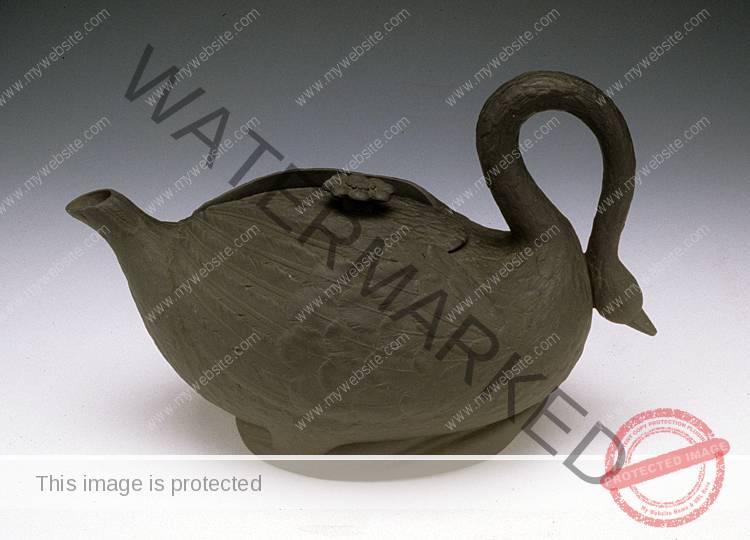 Sowter & Company was founded in the late 18th century by a Mr. Sowter and Mr. Bromley. In 1804, Sowter & Company was acquired by Peter Barker, son of the then-manager of Swinton Pottery, Joseph Barker. The Barker family also acquired Don Pottery, another nearby company, in 1838, and discontinued the Mexborough Old Pottery in 1844.

The color of this teapot comes from manganese added to the clay, which darkens when fired. Josiah Wedgwood—founder of Wedgwood & Company—discovered this technique in the late 1760s, and named it black basaltes (now more commonly called black basalt) after volcanic basalt rocks, which it resembles. This technique became popular among English potters at the time, and is still used today. Additional examples of black basalt pottery in the Kamm collection can be seen below.

When Wedgwood & Co. first began producing black basalt ceramics, neoclassical themes and styles were especially fashionable throughout Europe, and Wedgwood became well-known for producing pottery with forms and surface decoration that imitated ancient Greek pottery. In the later 18th century, the “Empire style” of decorative arts became popular in France, and later spread to England and other countries. This style, which is often considered part of the neoclassical movement, came about through the rise of the Napoleonic empire in France, and incorporated many elements of ancient Greek and Roman art. Unlike earlier neoclassicism, however, Empire style also included elements of ancient Egyptian art and symbols of the French imperial family. Swans, like the one represented in this teapot, were a particular favorite of Empress Joséphine, and often appear in Empire style art.

Church, Arthur. English Earthenware Made During the 17th and 18th Centuries. London: Printed for H.M. Stationery Off, 1911.

Jewitt, Llewellynn. The History of Ceramic Art in Great Britain from Pre-Historic Times Down to the Present Day. New York: Scribner, Welford, & Armstrong, 1878.