By Kamm Teapot Foundation on September 7, 2017 in Metal Works, Teapots 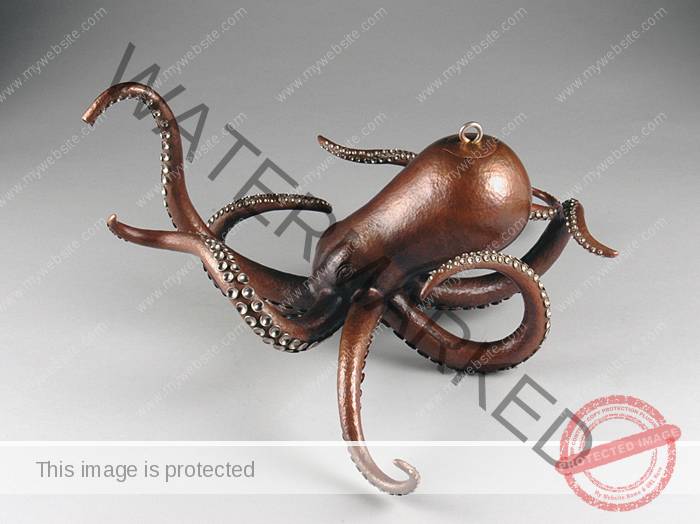 This octopus-shaped vessel by Miel-Margarita Paredes is a fully functional teapot with a removable lid over the hollow space in the head that forms the body of the teapot, and a curved tentacle forms the spout. 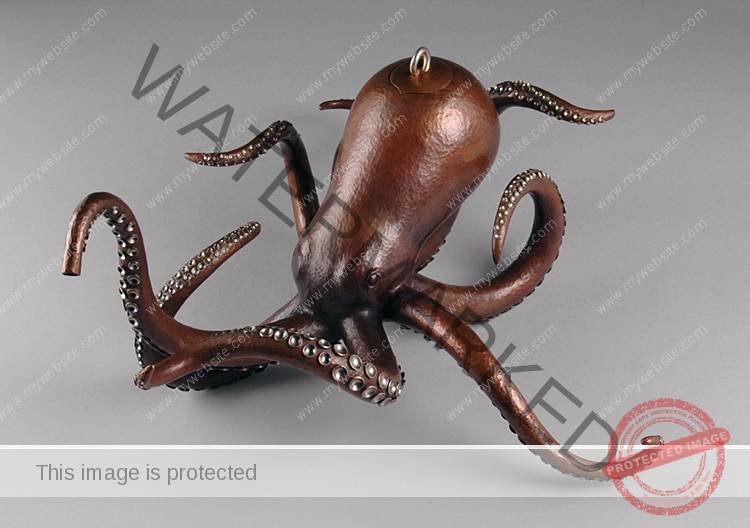 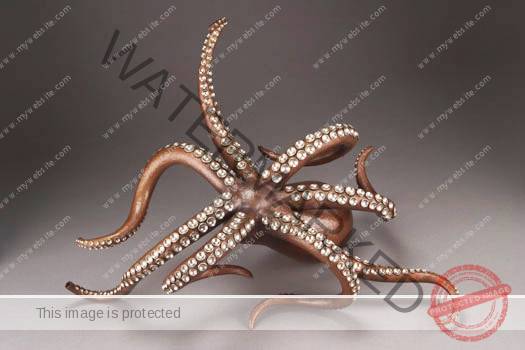 Paredes is a metalsmith and artist known for creating sculptures based on naturalistic animal forms. Some themes in her work include fashion accessories for animals, mechanical toys that imitate the motion of rabbits and birds, decorative objects incorporating animal faces and mouths, and metal helmets. In addition to this teapot, Paredes has also made functional tea infusers in the shapes of cicadas and moths, as well as a wearable, octopus-shaped helmet titled The Dullest Pencil.

Many of Paredes’s sculptures explore ideas about how humans interact with other animals, including anthropomorphizing the needs and desires of domesticated animals (as Paredes did in her Accessories series) and the symbolism of displaying animal bodies as hunting trophies or decorative works (as Paredes did in the Trophies and Gnaw series). It is not clear if Paredes intended for Octopus Teapot to have a specific symbolic meaning, but it is interesting to note that this teapot—a tool for human use—is in the form of a non-human animal which is known to use tools as well, and that it dispenses drinkable liquid from a creature that is sometimes dangerously poisonous, but also is consumed as food.

In addition to creating metal sculptures, Paredes also creates puppet armatures for the stop-action animation studio LAIKA. Her puppets appear in the films The Boxtrolls (2014) and ParaNorman (2012)

Additional images of the process of creating this teapot can be found on Paredes’ website. The Kamm Teapot Foundation also has three other sculptures by Paredes in its collection, including a non-pourable teapot sculpture titled Inquire After.

The Kamm Teapot Foundation is a private, non-profit, charitable trust that maintains an extensive teapot collection for its eventual public use in a museum setting. The collection numbers over 17,000 items and encompasses historical decorative arts, industrial design icons, unique works of contemporary art, novelty teapots, and teapot-related artifacts. This blog will showcase the collection and illuminate the teapots and the ideas behind them.
Kamm Teapot Foundation
Set your Author Custom HTML Tab Content on your Profile page
%d bloggers like this: