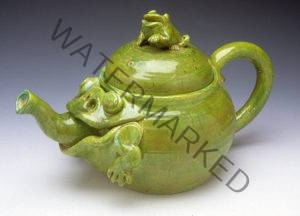 “Funk art:  the art of the absurd, the ridiculous, the exaggerated.”[i] – John Natsoulas

In the 1950s and 1960s some American artists began reacting against Abstract Expressionism. They were influenced by the Beat Generation and avant-garde movements such as Dada, Surrealism, and Pop Art.[ii] With “a healthy irreverence toward societal values,” these artists favored something more “tangible” and “unorthodox.”[iii] It is from these sentiments, that Funk art was born.[iv] Its epicenter was the San Francisco Bay Area and the University of California, Davis. Funk artists produced work that was alive with humor, employed shock tactics, and frequently relied upon found or everyday objects as well as autobiographical subjects. For ceramics, this meant a deviation from traditional forms and functionality in favor of more sculptural creations. The Funk approach to clay inevitably “blur[red]…the distinction between art and craft.”[v]

Within the Kamm Teapot Collection there are numerous examples of Funk art including works by Robert Arneson, David Gilhooly, Robert Hudson, Viola Frey, and Clayton Bailey. For the purposes of this blog post we will focus on two of these artists:  Arneson and Gilhooly.

Robert Arneson is often referred to as the father of the Funk art movement. Early in his career he broke from the “pottery-skill mentality” and helped to transform clay into “a sculptor’s medium.”[vi] Arneson’s irreverent playful work ranges from recreations of everyday household objects to “surrealist self-portrait busts.”[vii]

In his youth Arneson aspired to become a professional cartoonist, but by 1957 he had changed direction and committed himself to clay.[viii] For his M.F.A. he attended Mills College in Oakland, California which had a strong established ceramics program.[ix] There, Arneson studied under Antonio Prieto who “valu[ed] patience over spontaneity and control over self-expression.”[x] He produced traditional wheel thrown pottery at Mills College, but after graduation his approach began to change. Arneson increasingly looked to the pioneering efforts of Peter Voulkos for inspiration. He adopted Voulkos’ “passionate commitment to art” and rejected the idea that ceramics was merely a decorative or utilitarian medium.[xi] Despite Arneson’s evolving perspective, he did not find his own artistic voice until 1961. That summer, while doing a pottery demonstration at the California State Fair, he created “a handsome, sturdy bottle about a quart size and then carefully sealed it with a clay bottle cap and stamped it NO RETURN.”[xii] This quick creation, which Arneson titled No Deposit, No Return, marked “his break with the ceramics establishment.”[xiii]

In 1962 the University of California, Davis hired Arneson to develop a ceramics program.[xiv] Elated, he compared this opportunity to “the Medici’s deciding that they were going to sponsor me as an artist.”[xv] This position not only provided a salary increase and security, but it also allowed for artistic freedom. Pivotal works like Funk John, a stoneware sculpture of a large distorted toilet, soon followed. With Funk John he believed he had “finally made a Bob Arneson”[xvi] This jolting and controversial work launched his series based on household objects and served as a source of inspiration for many budding Funk artists.[xvii]

The Kamm Teapot Foundation has eight Arneson teapots that were all made in 1969. Often coated with a luster glaze, these stoneware and earthenware forms are crudely fashioned, humorous, and, in some cases, purposely startling. These characteristics are evident in works such as Golden Rod and Not Selected by the US Olympic Comm. When these teapots were created in 1969, Arneson had “achieved a measure of success” not only as a sculptor, but as a ceramics’ instructor as well.[xviii] 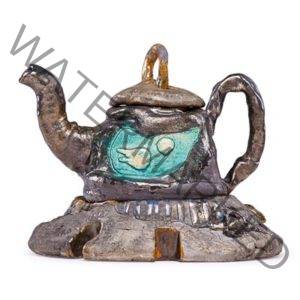 David Gilhooly was in Arneson’s first ceramics class at the University of California, Davis and he became a leading figure in the Funk art movement. [xix] His work “challenged the seriousness of the art world by focusing on absurd images of everyday objects.”[xx] Gilhooly’s most notable series concentrated on frogs or what he called Frog World. Frog World was an imaginative, idealized, parallel, amphibian world that Gilhooly used to explore topics such as mythology, space, religion, and history.

Gilhooly was originally a biology major at the University of California, Davis. He says he only enrolled in that ceramics class with Arneson in an effort “to impress a girl.”[xxi] However, that decision ended up changing the course of Gilhooly’s life. Quickly, he assumed the role as Arneson’s teaching assistant, a position that he retained until completing his master’s degree in 1967. Gilhooly and fellow students like Margaret Dodd and Peter VandenBerge worked together in a metal building called TB-9 (temporary building 9). From this space, Arneson and his students produced the work that ignited the Funk movement.

The Kamm Collection has thirteen works by Gilhooly as well as items from his personal archive. This grouping illustrates not only his wit, but also some of his thematic interests. There are teapots featuring Gilhooly’s frogs as well as pieces from his frog-food combinations. In the 1970s his frogs merged with food producing works like the Kamm’s small ceramic sculptures called Frog Taco and Frog Burrito. In these instances, a frog’s legs and head are included among the shredded cheese, tomato, and other toppings typically found in these Mexican dishes. In 1996 Gilhooly abandoned clay (for the second time) and his frogs to focus on creating shadow boxes that contain found object assemblages.[xxii] He felt that “these pieces [had] a formality that was lacking in the clay work, yet they contain[ed] the same…low humor.”[xxiii] 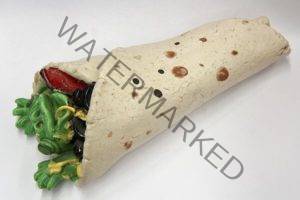 [ii] The Beat Movement or Beat Generation was a movement of young people in the 1950s who rejected conventional society and favored Zen Buddhism, modern jazz, free sexuality, and recreational drugs. https://www.google.com/search?q=Dictionary#dobs=beat%20generation, 3 July 2019.

[viii] Arneson particularly enjoyed comics. As a teenager he even created a weekly sports cartoon for the Benicia Herald.

[xxi] http://sites.onlinemac.com/cchang/Funk%20Ceramics.htm, 2 July 2019. When Gilhooly enrolled in that first ceramics class with Arneson he also took a beginning drawing class with Wayne Thiebaud.

[xxii] Gilhooly abandoned clay for the first time in 1983.