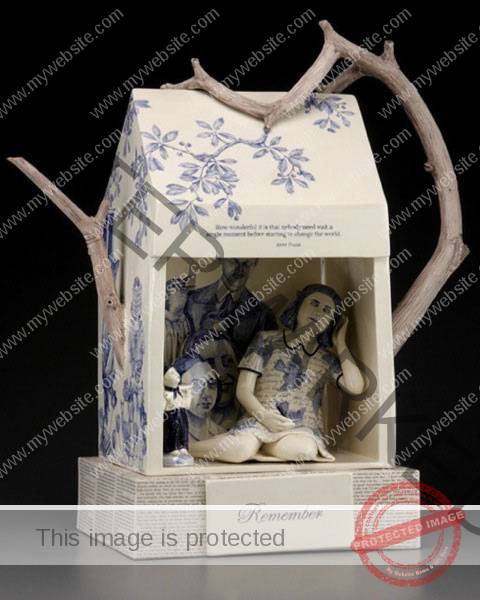 This teapot sculpture is by the contemporary ceramicist Laura, or “Red,” Weldon Sandlin. Sandlin was born in Owensboro, KY, and now lives and works in Decatur Georgia. She began her artistic career as a graphic designer, and switched to clay after taking a ceramics class. Since then, she has been largely self-taught. Sandlin’s ceramic sculptures are based on children’s literature, and often incorporate images from the stories, as well as text and wooden models of books. Most of her sculptures also incorporate the form of a teapot, which is both a nod to the history of ceramics and a metaphor for the creation and consumption of stories. 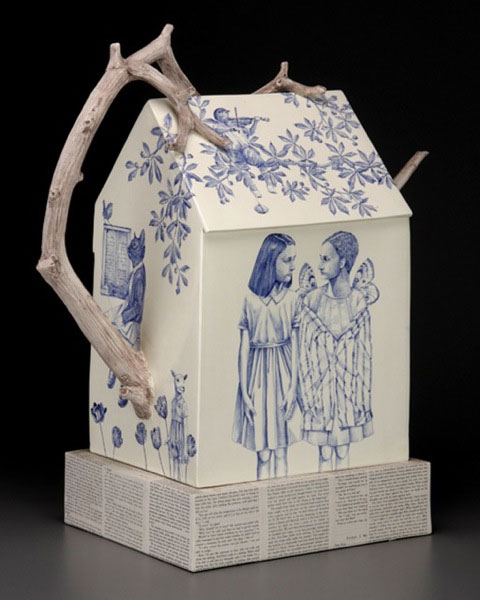 This sculpture is based on The Diary of Anne Frank (or The Diary of a Young Girl). This book, now published in 60 languages and considered a classic of 20th century literature, is the actual diary of a Dutch Jewish teenager, recounting two years of her life spent hiding in a secret compartment in the attic of an office building, along with her family and another Jewish family, during the Nazi occupation of the Netherlands. The people hiding in this apartment were eventually discovered and reported by an unknown person, and were arrested by the SS. After this, Anne and her sister, Margot, died of typhus in Bergen-Belsen concentration camp, and their mother perished at Auschwitz concentration camp. Of Anne’s immediate family, only her father survived the Holocaust. Despite the terrors her family endured, The Diary of Anne Frank is renowned for the optimism and hope expressed by its author in a time of great difficulty.

This sculpture incorporates text from an English translation of The Diary of Anne Frank, including the quote on the front of the sculpture, which reads “How wonderful it is that nobody need wait a single moment before starting to change the world.” Other pieces of the sculpture also use excerpts from the diary, including a passage about Anne’s mother on the back of the figure of her mother, and a passage about her sister on the back of the figure of her sister. The small figure of a boy in Dutch-style clogs has an inscription on the back of his yoke, which says “The Free Netherlands.” The sculpture also incorporates teapot elements, with a spout and handle in the form of tree branches attached to the house structure, referencing the trees outside the window of the attic. The base of the sculpture has a small drawer that contains a faux miniature diary, with a red plaid cover similar to the first notebook Anne used for a diary. 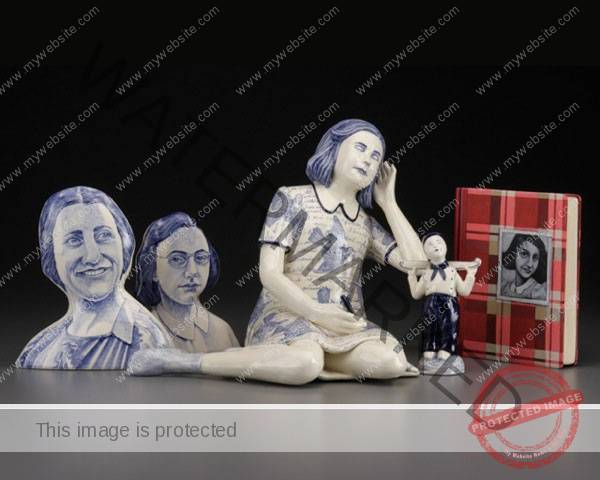 The sculpture also references Sandlin’s own life and reaction to the book. On the underside of the figure of Anne, Sandlin has written some words of her own, including “Happy 80th birthday Anne. You inspire me to live life to its fullest. To stop and appreciated the beauty in the world” and “Happy 100 birthday to Miep… to a brave woman to hide the beautiful treasures;” and “help save Anne’s tree. www.annefrank.com.” The birthday wish to Miep is a reference to Miep Gies, one of the coworkers of Anne’s father who helped to hide the family, who also saved Anne’s diaries and returned them to her father after Anne’s death. On the underside  of the mother figure, there is a message of love to Sandlin’s mother, Louise, and on the underside of the sister figure, a dedication to Sandlin’s sister, Lisa.