Karl Wirsum’s sculpture, paintings, and drawings are imaginative, colorful, humorous, and at times, disturbing and “cheerfully grotesque.”[i] Utilizing a range of materials and techniques, he creates works that exude great energy and stimulate one’s imagination.

Wirsum first made a name for himself as a member of the famed Hairy Who, a group of six artists all associated with the School of the Art Institute of Chicago.[ii] In the 1960s they took the local art world by storm with three exhibitions at the Hyde Park Art Center. [iii] Their work, which has been categorized as part of the Chicago Imagist movement, did not follow the popular artistic trends such as Abstract Expressionism or Pop Art.[iv] Instead, Wirsum says, “…we were thinking about…this personalized, unique object.”[v] Although it is difficult to summarize the group’s characteristics, their art was largely representational and antiestablishment. Their creations possessed a “wicked humor,” explored personal fantasy, and found inspiration in popular culture as well as the Windy City’s street life.[vi] Also, important was the Hairy Who’s exposure to an “encyclopedic nonhierarchical” art education.[vii] For these artists late medieval Italian art can be as influential as the comics.

For Wirsum, inspiration comes from an array of sources. Vintage toys, the Chicago blues, Japanese prints, and Mesoamerican art are just a few of his many stimuli. However, comics were an early and enduring influence. In his youth Wirsum wanted to become a comic book artist at EC Comics. He was particularly fond of Dick Tracy, Batman, and the many “weird-looking” villains found in those stories.[viii] His love affair with comics can also be traced back to his father who was “artistically inclined.” [ix] At the age of four Wirsum fell from a banister onto the basement floor. He fractured his skull and was hospitalized for about a month. To cheer Wirsum up his father decorated his room with drawings and paintings and he created a daily comic strip which he would deliver to the hospital. [x] He calls what his father did “a kind of art therapy” and it “made [Wirsum] want to become an artist.”[xi]

Over the course of his career Wirsum has explored a variety of formats and artistic concepts. His work has ranged from painting with acrylic to utilizing materials such as cardboard, Styrofoam, and papier-mâché to create three-dimensional designs. No matter the surface, Wirsum carefully, and at times obsessively, considers his use of color, line, space, and form. Always central in his art is his abstracted figures. These beings have been animated, distorted, and dissected through the years.[xii] Two additional constants have been one, Wirsum’s humor, which is often evident in his titles and use of word play, and two, his reliance on sketching or preliminary drawings. Drawing has provided a way for him to explore his ideas. Wirsum says, “I always see drawing as potential.”[xiii] 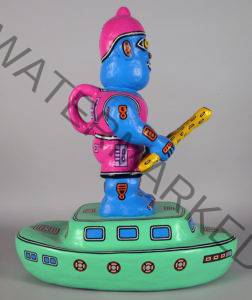 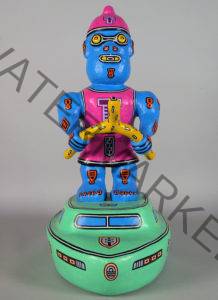 In 2004 Sonny and Gloria Kamm commissioned Wirsum to create a work for their teapot collection.[xiv] The result was this brightly painted sculpture that captures Wirsum’s colorful cartoonish style and humor. Titled Deep Tea Diver, the work features a large blue figure with a yellow mouth and eyes. He stands upon a green boat with an enclosed top cabin and small blue windows. The figure, which has a c-shaped handle extending from his back, wears pink shorts, a tank, and a cap. He holds a yellow divining rod. Black outlining is applied throughout the sculpture which accentuates the fields of color.

In an early drawing for the commission Wirsum states that the sculpture is “a play on rhabdomancy.”[xv] Rhabdomancy is divination by rods or wands.[xvi] Essentially, Wirsum is referencing a process called dowsing. Dowsing utilizes a Y-shaped or forked divining rod to find underground water or materials. It is said that the rod will dip downward, incline, or twitch when an encounter occurs. Wirsum’s Deep Tea Diver is in search of tea or “the magic fluid.”[xvii] He holds his divining rod outward awaiting the sign of discovery.

The central focus of this sculpture is the brightly painted diver. Like many of Wirsum’s humanoid figures, he appears to be a human-robot-alien amalgamation. These beings reveal not only Wirsum’s interest in comics and vintage toys, but also reflect his love of primitive art. Each appears to be “a kind of totem in their own world” as well as a “visual roller-coaster that sustain[s] the breathless thrill of a two-minute ride over much more time.”[xviii] Wirsum has stated that “[his] characters are alive” and indeed you feel this with Deep Tea Diver.[xix]

Wirsum continues to work in his Chicago studio. In recent years he has kept a rigorous schedule with exhibitions at the Prada Foundation in Milan, Italy, the Whitney Museum of American Art in New York, and at Art Basel in Switzerland. Currently Wirsum is featured in a show at the Pennsylvania Academy of the Fine Arts in Philadelphia and this September the Art Institute of Chicago will also open an exhibition called Hairy Who? 1966-1969 in which his work will also be predominately displayed. It appears that people’s appreciation and love for Wirsum’s creative genius only continues to grow.

Buchbinder, Leslie.  The Hairy Who and the Chicago Imagists. 26 September 2014. Film.

Pentimenti Productions, Hairy Who & The Chicago Imagists, 2015. (Link to video that provides additional information about Hairy Who)

Simpson, Suzanne.  Karl Wirsum, 1973. (Link to a video created while Wirsum was teaching at California State University in Sacramento)

[i] Ruth Lopez, “Karl Wirsum is Still the Mayor of Hairy Whoville,” Chicago Reader, May 3, 2017 (https://www.chicagoreader.com/chicago/karl-wirsum-interview-hairy-who-chicago-imagists-corbett-dempsey/Content?oid=26396169).

[ii] The other members of the Hairy Who were James Falconer, Art Green, Gladys Nilsson, Jim Nutt, and Suellen Rocca.

[iii] The Hyde Park Art Center was a community arts center and “storefront exhibition gallery” on Chicago’s South Side. The three exhibitions at Hyde Park Art Center were: Hairy Who (1966), False Image (1967), and The Nonplussed Some (1968). They were curated by Don Baum. Following these successful exhibitions, the Hairy Who then showed their work at venues such as the San Francisco Art Institute (1968) and the Corcoran Gallery of Art in Washington, DC (1969). Traveling to other venues provided greater exposure and the group began to have a larger impact nationally. The title of the first exhibition was Hairy Who which came from a question Wirsum asked the other exhibiting artists about the pompous art critic Harry Bouras. Dennis Adrian and Richard A. Born, The Chicago Imagist Print:  Ten Artists’ Works, 1958-1987, A Catalogue Raisonné, (Chicago:  The University of Chicago and The David and Alfred Smart Gallery, 1987), 15.

[iv] The phrase Imagism or imagist came from Franz Schulze’s 1972 book called Fantastic Images: Chicago Art since 1945. People began using the term following the publication of the book. The artists involved have no formulated ideology.

[x] Wirsum’s father’s comic strips were about elves. Unfortunately, Wirsum’s parents were killed in a car accident when he was nine years old.

[xii] The following excerpt is frequently used to describe the work of the Hairy Who: They have “an interest in organic form, two-dimensional forms as areas of unmodulated color, outline, and distinct contours, a great number of sperate visual incidents within the pictorial field, intense colors, and relatively smooth application of material. Adrian Dennis and Richard A. Born, The Chicago Imagist Print:  Ten Artists’ Works, 1958-1987, A Catalogue Raisonné, (Chicago:  The University of Chicago and The David and Alfred Smart Gallery, 1987), 16-17.

[xiv] The Kamms have made a practice of commissioning artists to make teapots (especially those who are not teapot makers, such as Wirsum). They are also fond of Chicago artists as both Sonny and Gloria Kamm are Chicago natives.

[xvi] Divination is defined as the art or practice that seeks to foresee or foretell future events or discover hidden knowledge usually by the interpretation of omens or by the aid of supernatural powers. Reading tea leaves is another form of divination. https://www.merriam-webster.com/dictionary/divination (August 5, 2018).