By Allie Farlowe on September 24, 2018 in Metal Works, Teapots 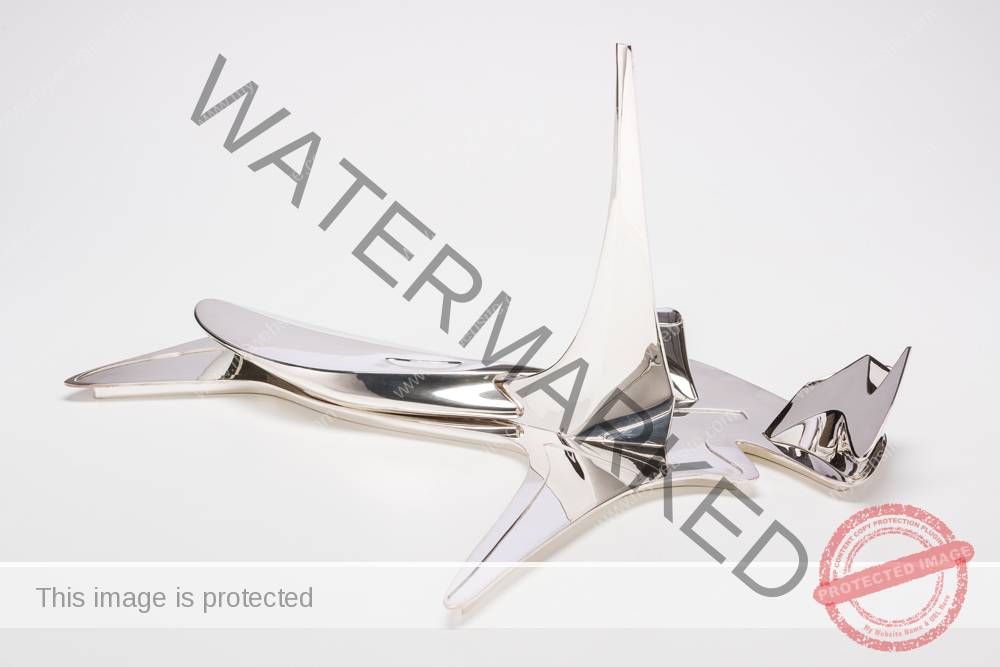 “As a woman, I’m expected to want everything to be nice and to be nice myself. A very English thing. I don’t design nice buildings – I don’t like them…”[i] -Zaha Hadid

Considered a superstar of the architectural world, Zaha Hadid is internationally recognized for her ingenuity. Her bold, but elegant designs transform landscapes with “twisting dynamics,” curving lines, organic forms, and a “sensuous layering” of materials.[ii] These are often futuristic creations that feel as if they are plucked right out of a science fiction movie.

Hadid was born to a progressive and affluent family in a peaceful flourishing Iraq.[iii] This was before Saddam Hussein’s dictatorship and the Ba’ath Party’s rise to power. Her parents stressed the importance of a well-rounded education as well as an understanding of cultures beyond her Sunni Muslim background. She was sent to a French Roman Catholic school, spent a year studying in Switzerland, and later, Hadid pursued a degree in mathematics at the American University in Beirut, Lebanon.[iv] She says, “there was never a question that I would be a professional.”[v]

As a young child Hadid recalls being fascinated by architecture. One memorable experience occurred when she was a teenager. Hadid’s father took her by boat to the Sumerian marsh villages in southern Iraq.[vi] During this trip she was captivated by “the beauty of the landscape – where sand, water, reeds, birds, buildings, and people all somehow flowed together…” This encounter had a lasting impact and was a source of continued inspiration. Reflecting on the marsh villages later in life, Hadid said, “I’m trying to discover – invent, I suppose – an architecture, and forms of urban planning, that do something of the same thing in a contemporary way.”[vii]

In 1972 Hadid began her training at London’s Architectural Association School of Architecture.[viii] Following graduation she joined the Office for Metropolitan Architecture (OMA) where she worked for her former teacher and mentor Rem Koolhaas. Hadid only stayed at OMA for three years. By 1980 she had opened her own firm in London. The early days at Zaha Hadid Architects were not easy. She faced numerous rejections and gained a reputation as a “paper architect,” since the firm was primarily producing conceptual designs.[ix] One project, that could be considered a turning point for Hadid, was the Lois & Richard Rosenthal Center for Contemporary Art in Cincinnati, Ohio. Completed in 2003, the New York Times called this design “the most important American building to be completed since the Cold War.”[x]

The Kamm Teapot Foundation has two examples of Hadid’s work. Both designs explore the concept of the tea and coffee set. One is for Sawaya & Moroni and the other, which is our focus here, was created for Alessi. This design is part of a group of limited-edition experiments done by the company.[xi] First initiated in 1980, Alessi engaged a group of eleven architects to explore the creation of silver beverage services. Many giants of architecture such as Michael Graves and Robert Venturi were among the participants.[xii] Their work expressed a “stylized neoclassical vocabulary” and “turned teatime tabletops into miniature postmodernist villages.”[xiii] For this reason these creations earned the name Tea and Coffee Piazzas. In 2003 Alessi revitalized the venture choosing twenty-two architects from ten countries. Hadid and the other chosen participants, such as Toyo Ito and Thom Mayne, were tasked with the creation of a service that included a sugar bowl, milk pitcher, and tray. Selections from the final collection were first exhibited in Milan, Italy.

When Alessi announced this latest group of designs, there was quite a bit of discussion in the press about the profitability of these productions. The New York Times reported that the company still had inventory from the first generation of these experiments. This accumulation primarily occurred because these were not inexpensive purchases for the average household. Alessi responded to these matters by pointing out that the original Piazzas led to the creation of mass marketed products. The most successful being Michael Graves’ Whistling Bird teakettle. Also, they proclaimed that frequently “we need a bigger experiment, where results are unforeseeable.”[xiv]

Hadid’s Tea and Coffee Piazza has been described as “a swoosh,” “a glob of pulled taffy,” or liquid metal. [xv] It is essentially a table sculpture or three-dimensional puzzle that features four parts:  a teapot, coffee pot, creamer, and a sugar bowl. Each piece fits together on a tray. There are two ways of viewing the design: first, in representative mode where the sculpture is compactly combined and second, in functional mode when the different components are “flipped and turned” for use.[xvi] The tray provides directions on how to utilize and arrange the forms. Ultimately, this structure has transformed tea time making it a “sculptural riddle.”[xvii]

Aesthetically the Tea and Coffee Piazza is reflective of Hadid’s architectural projects. The highly polished smooth structure, which appears to be caught morphing or changing shape, contains fluid lines, rounded forms, and an elegant futuristic sense of style. It also plays with strong horizontal and vertical components. Of the Piazza, Hadid identified the teapot as a “wide, flat, organic shape” and said the “coffee pot rises from the landscape like a tower.”[xviii] These contrasting features create a tension within the work. Unequivocally, with this design, Hadid is breaking all the traditional rules associated with the construction and appearance of a tea and coffee service.

Over the course of Hadid’s career she created numerous, dramatic, one-of-a-kind buildings. Noteworthy examples include Guangzhou Opera House in China (2010) and the London Aquatics Center for the 2012 Olympics. She also branched out designing products such as furniture, shoes, and lines of jewelry. In the latter portion of her life Hadid received many accolades for her architecture. She won the Stirling Prize twice (2010, 2011), the Royal Gold Medal (2016), and in 2012 Queen Elizabeth II made her a Dame Commander of the Order of the British Empire.[xix] One of her highest honors came in 2004 when Hadid was awarded the Pritzker Prize. Considered the Nobel Prize of architecture, she was the youngest person and first woman to be honored with this recognition.

[iii] Hadid’s father, Muhammad al-Haji Husayn, was a politician and industrialist. He was also co-founder of the National Democratic Party in Iraq. Her mother, Wajiha, was an artist.

[vi] Sumerian architecture is considered the earliest monumental architecture in the world. People living between the Tigris and the Euphrates rivers began to build large substantial buildings in approximately 3500 BC.

[viii] Hadid’s family also left Iraq for London. Saddam Hussein’s rise in power and the outbreak of war with neighboring Iran were the reasons for their departure. Hadid eventually became a British citizen.

[xi] The concept for the first group of designs was based on an idea from Alessandro Mendini. This second installment was orchestrated by Alberto Alessi. Ninety-nine editions were produced of Zaha Hadid’s Tea and Coffee Piazza.

[xii] The Kamm Teapot Foundation has within its collection Tea and Coffee Piazzas by Michael Graves, Charles Alexander Jencks, Paolo Portoghesi, Aldo Rossi, and Hans Hollein as well as lithographs that illustrate various designs from this original Alessi project.