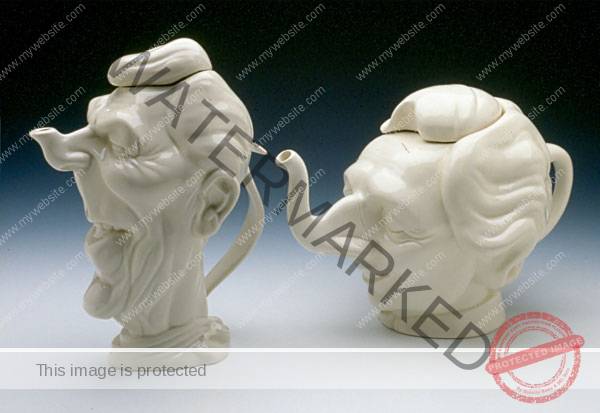 These teapots were designed by British satirists Roger Law (b. 1941) and Peter Fluck (b. 1941), who first met and became friends in art school. Each had independent careers illustrating and cartooning before forming the partnership Luck & Flaw in 1975. They began creating three-dimensional caricatures of public figures, which were shown in The New York Times Sunday Magazine, National Lampoon, TIME, and Stern magazine in Germany. In 1981, the duo was approached by Martin Lambie-Naim, a graphic designer for the BBC, and asked to create a political satire show using puppet caricatures. From this, Luck & Flaw created the TV show Spitting Image, which ran from 1984 to 1996. At the height of its popularity, Spitting Image had over 12 million viewers in England alone, and created several spin-offs, including a two-part special mocking Ronald Reagan, which aired on NBC in the United States.

The “Ronald Reagan” and “Margaret Thatcher” teapots were part of the merchandising of Spitting Image, and playfully depict these conservative world leaders in a similar manner to the show’s puppets. Other ceramics designed by Luck & Flaw include teapots and teacups in the form of the British royal family, and then-leader of the Labour Party Neil Kinnock. These teapots were each limited production, and sold as collector’s items in the 1980s. Manufacturing companies for these teapots included Carlton Ware and Moorland Potteries, both in Stoke-on-Trent, England, and Hall China in East Liverpool, OH, USA.

Since the cancelation of Spitting Image, Roger Law has gone on to become a ceramicist and cartoonist, working in Sydney, Australia and Jingdezhen, China. Peter Fluck is now a full-time artist living in Cambridge, England, and creates works in many media, including kinetic mobile sculptures.

“Return to Planet Stoke.” from Whatever Happened to the Teapots? BBC News  November 15, 2009.