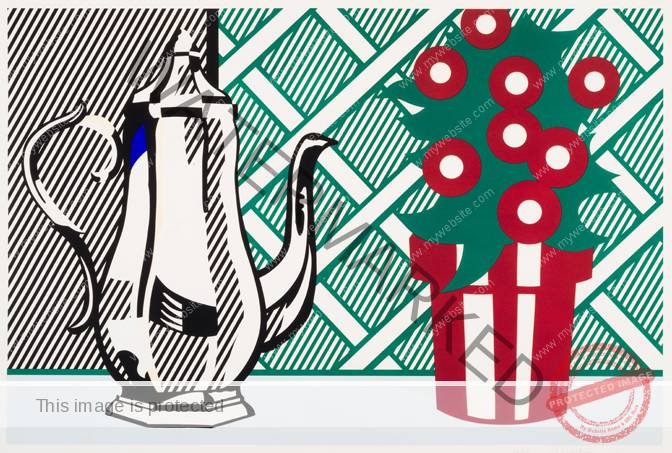 “Pop Art looks out into the world. It doesn’t look like a painting of something, it looks like the thing itself.”[i] – Roy Lichtenstein

Pop Art first broke onto the British art scene in the 1950s.[ii] Derived from Neo-Dada, it was the “brain-child” of a group of artists, writers, and architects who felt compelled to comment on the “commercialization of culture” that occurred following World War II.[iii] By 1960, this movement had crossed the Atlantic. American Pop Art, like its British forerunner, pulled imagery straight from everyday objects, mass media, and popular culture. Artists like Andy Warhol, Roy Lichtenstein, and Jasper Johns challenged artistic traditions by blurring the lines between “’high’ art and ‘low’ culture.”[iv] With a substantial dose of irony and wit, these realistic emotionally-removed depictions deviated from and rebelled against Abstract Expressionism.  The artist Robert Indiana stated, “Pop is everything art hasn’t been for the last two decades. It is basically a U-turn back to a representational visual communication, moving at a break-away speed…Pop is a re-enlistment in the world…It is the American Dream, optimistic, generous and naïve…”[v]

The Kamm Teapot Foundation has numerous examples of Pop Art in its collection. Roy Lichtenstein, Claes Oldenburg, Keith Haring, Kate Anderson, Noi Volkov, and Ann Coddington Rast are just some of the artists represented. This blog post will highlight three of these individuals: Lichtenstein, Haring, and Volkov. 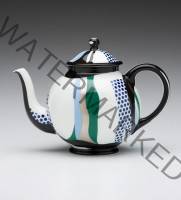 Lichtenstein was a prominent figure in the Pop Art movement. He is best known for his paintings and prints that reference commercial art and feature icons from popular culture such as Mickey Mouse or Popeye. Although Lichtenstein began hiding cartoons in his abstract work in late 1950s, he did not fully embrace these characters as his subject matter until the summer of 1961. One of his first paintings in this new style was called Look Mickey. Based on a Disney illustration in a Little Golden Book, it presents Donald Duck wrestling with his fishing rod, which is hooked to the back of his jacket. In a cartoon bubble he says, “Look Mickey, I’ve hooked a big one!” [vi] Within this large painting Lichtenstein simulated, for the first time, a dot patterning known as Benday dots.[vii] Commonly used in print imagery, this patterning brought a mechanical or commercial quality to his work. Look Mickey was shown at Lichtenstein’s first solo exhibition at the Leo Castelli Gallery in 1962.[viii] While this exhibition received some criticism, it also sold out before the opening night. For Lichtenstein it was a pivotal moment. These cartoon-based creations would impact the trajectory of his own work for years to come and they would leave a lasting impression on the art world.

The Kamm Collection contains four Lichtenstein works: a porcelain tea set, a ceramic sculpture of two stacked cups, a large lithograph screen-printed design featuring a teapot and a plant, and an oversized exhibition poster showcasing a bronze sculpture of a cartoonish cup. This grouping reveals many characteristics associated with Lichtenstein’s signature style. As you study these works you will notice clean lines, saturated flattened colors, an elimination of incidental details, a reference to the Benday dots, and a graphic sensibility commonly found in commercial imagery. 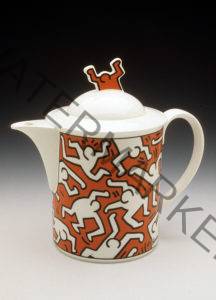 Pop artist Keith Haring received widespread recognition for his cartoon-like creations that rely on simple contouring. Derived from “elements of ‘low brow’ culture such as comics or graffiti,” his work successfully “infiltrated the worlds of fine art, advertising, and fashion.”[ix] Haring believed that the “best art was a direct, accessible art, like the art of children.”[x] His work undeniably captured this spirit. However, with these playful images Haring also commented on important social issues like the AIDS epidemic or drug addiction.

In 1978 Haring moved to New York City to study at the School of Visual Arts. After arriving he became deeply involved in a thriving alternative art community. This was occurring “outside the gallery and museum system, in the downtown streets, the subways, and spaces in clubs and former dance halls.”[xi] Haring embraced this shift within the art world and by 1980 he had discovered an authentic platform for his work. In essence, New York’s subway system became Haring’s “laboratory.”[xii] Using the matte black surfaces that were applied to cover up old advertising logos, he created his now infamous “subway drawings.”[xiii] For the next five years Haring produced hundreds of white chalk sketches in swift succession. Dancing “Gumby-like” figures, dogs, babies, and other Haring creations frequently greeted the city’s large commuter community.[xiv] With these simple images he successfully reached the broad audience he was seeking, and his work quickly grew in popularity. Unfortunately, Haring’s career was short-lived. He died at the age of thirty-one from complications associated with AIDS.

Within the Kamm Teapot Collection there are two Haring ceramic tea sets manufactured by Villeroy & Boch. Both feature his playful figures that seem to dance across the surface of each teapot, cup, or saucer. These designs are repetitive and rely heavily on black contouring which is offset by bold selective colors. Products, such as these, illustrate Haring’s openness to the commercialization of his work and they support his belief that art should be accessible. In the spirit of accessibility, Haring opened a Soho boutique in 1986 called the Pop Shop where he sold reprints of his popular imagery on inexpensive items such as t-shirts and buttons. Haring stated, “If commercialization is putting my art on a shirt so that a kid who can’t afford a $30,000 painting can buy one, then I’m all for it…Art is nothing if you don’t reach every segment of the people.”[xv] 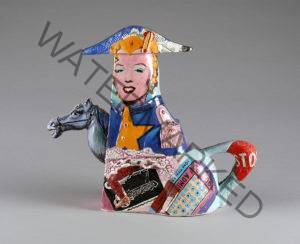 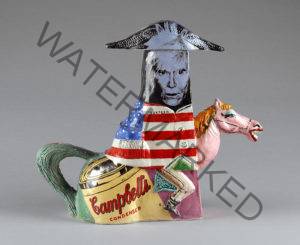 Noi Volkov is a Russian-born ceramic artist and painter who experienced the suppressive government of the former Soviet Union during the 1960s and 1970s. He is best known from his whimsical teapots that are inspired by classical masters and contemporary artists such as Sandro Botticelli, Pablo Picasso, Salvador Dali, James Rosenquist, and Robert Motherwell. In Volkov’s current artist statement he says, “My work depicts famous works, artists, and artistic movements in various ways to illustrate their influence on the art world. I mix artists in unexpected ways, but there is always an artistic thread that binds them together.”[xvi]

For Volkov Pop Art has been a continual source of inspiration. His two ceramic Andy Warhol Teapots in the Kamm Collection demonstrate how he typically approaches his teapot forms. Both contain not only the recognizable face of Warhol himself, but also imagery that is closely connected to the artist such as his Campbell’s Soup Cans or his portrait of Marilyn Monroe. Volkov playfully assembled these brightly painted cultural icons in a stacked formation. With a fresh twist, his teapots simultaneously acknowledge, celebrate, and perpetuate the Pop concepts that Warhol expressed with his own work. These sculptural forms have been a successful series for Volkov. Since 1990 he has lived in the United States. From his Maryland studio, Volkov continues to paint, sculpt, and push his work in new directions. 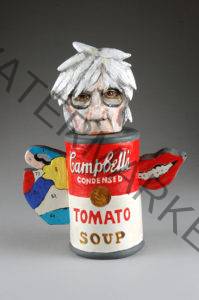 [ii] The term “Pop Art” was coined in 1955 by Lawrence Alloway, a British curator and critic. It was a new form of “popular” art. https://www.oneartnation.com/where-did-pop-art-come-from, 13 March 2019.

[vii] Benday dots, which are similar Pointillism, were named after American illustrator Benjamin Day. Essentially it is the process of coloring with shaded dots.

[viii] The Leo Castelli Gallery was in New York City.

[ix] Abigail Cain, Keith Haring on How to Be an Artist, https://www.artsy.net/article/artsy-editorial-keith-haring-artist