By Allie Farlowe on February 4, 2019 in Ceramics, Teapots

“A potter is one of the few people left who uses his natural faculties of heart, head, and hand in balance…”[i] — Bernard Leach, 1961 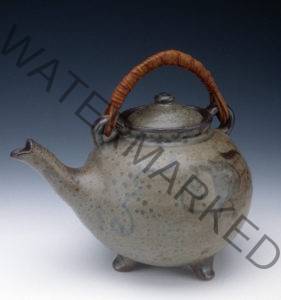 Bernard Howell Leach is considered the most influential potter of the twentieth century. He left an irrefutable mark with his writings, teachings, prolific work in clay, and contributions at the potteries he established. Among his many accomplishments, Leach is credited for merging Eastern and Western craft traditions and for elevating utilitarian pottery to an art form. In the United States during the latter half of the twentieth century no one had a greater impact on American ceramics than Leach.

Born in China into a wealthy British family, Leach was sent to England to be educated at the age of ten.[ii] In 1909, after attending art school, he decided to move back East.[iii] Leach hoped to establish himself as a painter while also teaching the printmaking technique of etching.[iv] After settling north of Tokyo, he proceeded with his initial plans and developed a solid reputation within the Japanese artistic community. Then, in 1911 a transformative encounter altered the trajectory of his career. Leach was invited to a raku party where the participants decorated and fired pots.[v] Of this impactful experience, Leach has stated that “…[he] was carried into a new world, something dormant awoke. Enthralled, [he] was on the spot seized with the desire to take up this craft.”[vi]

With great enthusiasm Leach began studying ceramics under the sixth Kenzan potter Urano Shigekichi.[vii] After a few years of instruction, he was producing works to exhibit.[viii] Eventually Leach would construct a pottery in Abiko, Japan and, after it burned down, another workshop in Tokyo.[ix] His stoneware, raku, and porcelain from this period reveal a developing personal style inspired by Chinese, Korean, and English traditions as well as Pre-Columbian and Delft wares. Only occasionally was Leach influenced by Japanese pottery and he did not attempt to imitate the Kenzan masters.[x] Instead, he adopted the Japanese way of looking at ceramics.[xi] Leach subscribed to the belief that “pottery started from the clay up and not from the decoration down.”[xii] This meant attention was given to the creation of the clay bodies and glazes before the surface of the pot was considered. Also, in the Japanese custom, Leach emphasized the space on and within a pot, the functionality and weight of a vessel, and aspects of the form such as the “nature of the foot-ring and elegance of the seal-mark.”[xiii]

By 1920 Leach was ready to return to England.[xiv] However, before his departure he met bourgeoning ceramicist Shoji Hamada. Hamada would become Leach’s assistant and a like-minded lifelong friend. He joined Leach on his journey to England and together they built the famed Leach Pottery in St. Ives, Cornwall. [xv] Their arrival in St. Ives is often considered the “starting point of modern ceramics.”[xvi] Without a doubt Leach and Hamada created “ripples which are still widening today.”[xvii]

Impact in the United States

In the United States those ripples of influence were certainly felt. Although Leach’s work was featured in traveling exhibitions, it was his publications, tours abroad, and the students who studied with him that appear to be the most impactful. In 1940 Leach published A Potter’s Book, which is also known as the potter’s bible. This book defined his artistic philosophy, gave aesthetic advice, and provided practical instructions on preparing clays, making pots, mixing glazes, and firing kilns. Much of what is found in this text is closely connected to the Japanese Mingei Movement which was founded by philosopher Soetsu Yanagi as well as Hamada, and Leach.[xviii] Mingei, which means “arts of the people,” emphasized concepts such as functionality, community, truth to materials, the beauty of irregularity, and intuition.[xix] It also stressed that objects should be handmade, inexpensive, and available to all. These principles combined Eastern and Western perspectives.[xx] After World War II many American ceramicists relied on A Potter’s Book. Leach provided them with a kind of manual or guide to follow as they searched “for a life as an independent craftsman.”[xxi]

Leach made three trips to the United States in 1950, 1952, and 1961. During these tours he lectured and performed demonstrations from coast to coast.[xxii] Leach also visited with old friends such as abstract expressionist painter Mark Tobey and the potters Warren and Alix MacKenzie.[xxiii] On the 1952 trip Hamada and Yanagi joined him. While Hamada and Leach demonstrated, Yanagi lectured on Zen aesthetics of beauty.[xxiv] The “three musketeers” made many noteworthy tour stops including one at the Archie Bray Foundation where they met Peter Voulkos and Rudy Autio and at Black Mountain College where they taught a two-week seminar.[xxv] The potter Karen Karnes, who was at Black Mountain, stated that from this experience she learned to “just accept the clay and the wheel as they are and do the best you can with what you have.”[xxvi] 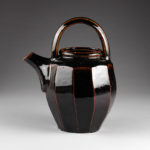 Within the Kamm Teapot Collection, there is a Leach teapot as well as two Hamada teapots and a tea bowl. There are also numerous works by American artists who were influenced by these masters. Karen Karnes, Mark Hewitt, Randy Johnston, Val Cushing, and, of course, Warren MacKenzie are just a few of the many. Warren MacKenzie and his wife Alix are particularly important when examining Leach’s impact. After reading A Potter’s Book, they traveled to St. Ives to learn from Leach. They were the first Americans to make this pilgrimage, apprenticing for two and a half years. Throughout his career MacKenzie produced functional wares that observed the “mingei ideals of truth to materials and beauty of repetition.”[xxvii] He “[used] sheer volume to lose himself in the work.”[xxviii] MacKenzie taught for thirty-seven years at the University of Minnesota sharing his knowledge and the concepts he learned from Leach with generations of students.

Bernard Leach lived a full life continuing to produce work until 1972. Leach and his philosophies are embedded   in the development of modern ceramics, especially in the United States. Among the many honors bestowed upon him, Leach was made a Commander of the Order of the British Empire (1962) and he received Japan’s Order of the Sacred Treasure, Second Class (1966). The Leach Pottery in St. Ives is still open today.

[ii] Leach’s mother, Eleanor Sharp, died not long after his birth. After her death, he lived with his maternal grandparents in Kyoto, Japan. Once his father, Andrew Leach, remarried, he lived in China and Singapore with him. Leach’s dad died in 1904. Leach attended Beaumont College in Old Windsor, Berkshire, England in 1897.

[iv] Leach brought with him from London a small etching press.

[v] Raku is the art of making low-fired earthenware ceramics.

[vii] Urano Shigekichi or Kenzan VI (1851-1923) was an artist potter who worked in Kenzan pottery tradition. Leach and architect Kenkichi Tomimoto were jointly given the title of Kenzan VII. This was a rare honor for a Westerner such as Leach.

[ix] His workshop in Abiko, Japan was on Soetsu Yanagi’s property. Yanagi convinced him to come to Abiko which was a kind of artist colony that attracted visual artists, writers and intellectuals. Aristocratic patron Viscount Kuoroda generously offered Leach a kiln in Tokyo in 1919.

[x] Leach’s relationship with Japanese culture/pottery is often debated. Most scholars believe Leach helped found the Mingei movement in Japan and that he did not copy Japanese pottery. Instead, his pottery is inspired by numerous cultures and their ceramic traditions.

[xiv] Leach’s family also returned to England in 1920. While in Japan Leach married his cousin Muriel Hoyle and had children. His sons Michael and David would become potters as well. There is a teapot by David Leach in the Kamm Teapot Collection. Leach returned to England with an invitation from Frances Horne. Horne was establishing a Guild of Handicrafts within the artist colony in St. Ives and was searching for a potter.

[xv] In St. Ives Leach and Hamada built an Asian climbing kiln for high temperature firing, the first of its kind in the West. Also, they set up a small round updraft kiln for earthenware and oxidized raku which introduced this technique to the West. Hamada’s technical knowledge and training in glaze chemistry played an important role in the development of the pottery.

century. Also, important was Zen Buddhism and the traditions associated with the Japanese tea ceremony.  Herring, 14.

[xxiii] Mark Tobey and Leach met in the early 1930s at Dartington Hall in Devon, England. Tobey was a believer in the Bahá’í Faith. Leach would also become a practising Bahá’í.