“While Dale Chihuly is the tide that raised all boats, Marquis is the craft intelligence that made the vessels seaworthy.”[i] – Regina Hackett, Seattle Post, 2001

Richard Marquis has been an instrumental force in the studio glass movement in America. His work, which is both “playful and masterful,” is described as a “distinct blend of New World sensibility and Old World craftsmanship.”[ii]

The Kamm Teapot Foundation contains one hundred twenty-one works by Marquis. It is a wide-ranging collection that illustrates this artist’s humor, versatility, and technical expertise. The foundation’s website features a selection of these designs including examples of Marquis’ Stars and Stripes, Heart Pattern, and Lumpyware teapots. For this blog post emphasis is placed on a Zanfirico Teapot Goblet, one of thirty-five versions of this form acquired by the Kamms.

Marquis was introduced to glass while attending the University of California at Berkeley.[iii] He arrived in the San Francisco Bay area in 1963. Berkeley in the 1960s was an epicenter of activism and its decorative arts department was a “hub of activity.”[iv] Some of Marquis’ first classes were with famed ceramicists Peter Voulkos and Ron Nagle, but then, one afternoon he saw professor Marvin Lipofsky blowing glass.[v] This was a significant moment for him. Marquis soon realized he preferred glass over other mediums. For him, “…glass was always the hardest and most interesting.”[vi] With this material, “you have to go through years of practice to do anything. You can’t go into the hot shop and just putz around…”[vii]

In 1969 Marquis received a Fulbright-Hayes fellowship to work on the island of Murano in Venice, Italy.[viii] He was one of the first Americans to study in this renowned glassmaking center. Here Marquis observed and learned firsthand from master glassblowers. He remembers the time fondly saying, “There were so many things going on [that] I was like a kid with only a penny to spend in a candy store…”[ix] A considerable amount of Marquis’ time was spent at the Venini factory. It was there that he learned ancient techniques such as zanfirico and murrine.[x] Utilizing these processes, Marquis created glasswork that was profoundly American like his stars and stripes cups, bottles, and pills.

Marquis’ experience in Murano “[loomed] large in [his] development as an artist and a person.”[xi] However, there were many other important influences. While at Berkeley, Marquis encountered funk, fetish-finish, and abstract expressionism.[xii] These stylistic approaches were impactful, but so were other stimuli such as underground comic imagery, the paintings of Giorgio Morandi, the conceptual sculpture of James Melchert, and the assemblages of Joseph Cornell and H.C. Westermann. Ultimately, Marquis developed a distinctive style that was “smart, anti-establishment, and lowbrow” while also being “obsessive in technique and rebellious in appearance.”[xiii] 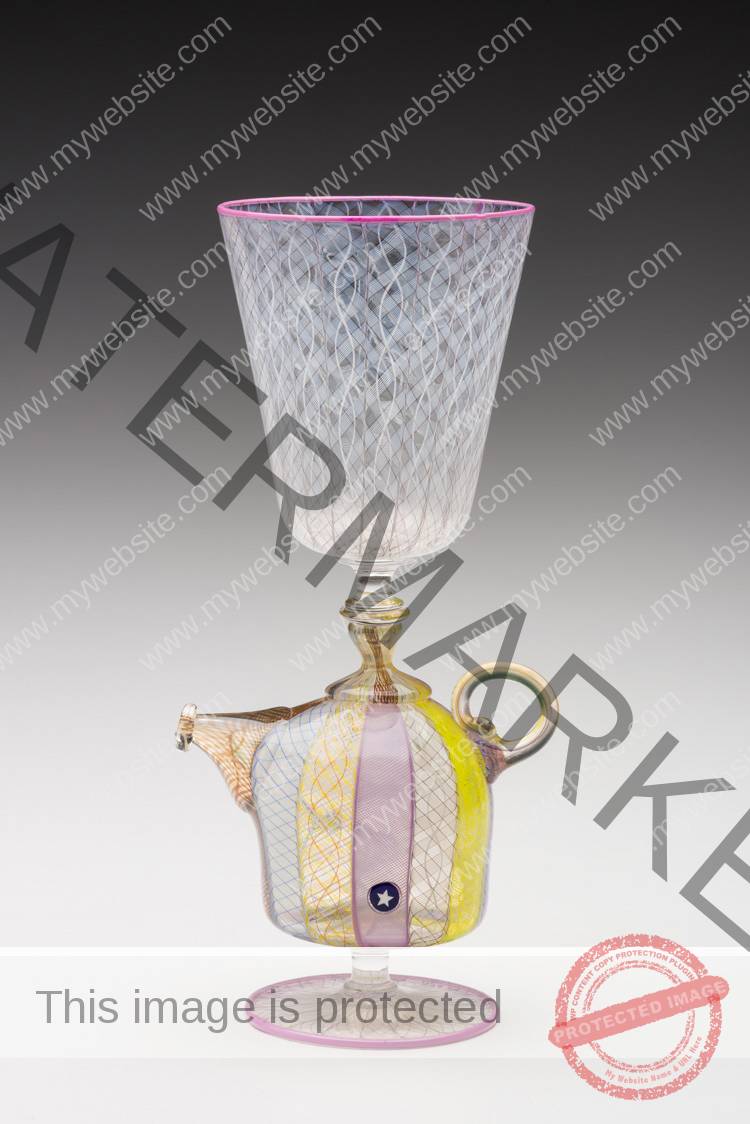 In 1988 Marquis began making Teapot Goblets. They were a project that he initiated with glass artist Dante Marioni who was working for him at the time.[xiv] Described as whimsical, “eccentric, and beautiful,” each of these blown glass goblets has a teapot protruding from its stem. The example being examined here includes a cylindrical teapot with a looped handle and conical spout. It bulges from the stem in between the goblet’s thin tapered cup and flat circular foot. The work is made utilizing zanfirico latticino.[xv] These Italian terms refer to the intricate embedded threads of glass that spiral and twist creating a lattice-like pattern. Marquis chose white bands for the cup and foot with pink edges. However, the teapot is pale, but multicolored with a white star murrine.

Essentially the works in this series combine the Venetian “operatic” approach to goblet making with Marquis’ love of teapots.[xvi] Venetian goblets are known for being technically challenging structures with a long rich history. Marquis is aware of that history. While he honors the past, he playfully puts a contemporary twist on this traditional arrangement. Early in Marquis’ career he began experimenting with the teapot form in glass. His designs, which have varied in shape and decoration, have been important contributions to the studio glass movement in the United States. Marquis has said he is drawn to the teapot because “it [has] no glass tradition,” “it [is] so un-macho,” and “it [has] so many elements with which to mess around.”[xvii] For Marquis and Marioni these lively Teapot Goblets would become signature collaborations.

In 1982 Marquis moved to an island in the Puget Sound off the coast of Washington State. He found a place away from the crowded and changing Berkeley. Here he could do things his own way. Among the move’s twelve truckloads was his collection of objects. Since childhood Marquis has been a collector, a collector of things that many people might not necessarily value.[xviii] Oil cans, antique bug-sprayers, Christmas bubble lights, saltshakers, and pushbutton knives are just some of the many items that adorn his island workshop and home. In some instances, these objects have been combined with his glasswork. This decision seems to “[poke] a sharp finger into the studio glass movement’s anxiety about being taken seriously.”[xix]

Although it has been said that “[Marquis] is one of the most under-recognized people in glass,”[xx] His contributions have been vast. Marquis is a pioneer who has shared his knowledge generously as an artist and teacher.[xxi] This generosity as well as his technical expertise and often light-hearted approach has had an impact on generations of glass artists following in his footsteps.

[v] Marvin Lipofsky was hired to launch the glass program at Berkeley in 1964. He had been a student of Harvey Littleton at the University of Wisconsin, Madison.

[viii] Murano is a compact group of islands about .9 miles from Venice. Glass makers settled in Murano before the 11th century. Numerous glasshouses call this area home.

[x] Zanfirico (or sanfirico) is the present-day term used in Italy for vetro a retorti which is glass with embedded twisted threads forming lattice-like patterns. It includes decoration made of opaque white or with colored glass threads or both. It falls under the broad general term of filigrana (filigree) and in latticino when only white threads are utilized. Murrine or murrina are made from glass canes (long thin rods of glass). When the canes are cut in cross-sections, colorful patterns or images are revealed. When numerous pieces are utilized, the murrina create a mosaic-like effect. Harold Newman, An Illustrated Dictionary of Glass, London:  Thames and Hudson, Ltd., 1977.

[xv] Latticino or latticino (Italian, derived from latte or milk) are used in Venice/Murano, Italy to refer only to clear glass decorated with embedded threads of glass, usually (latticino) white threads. It is often confused with the term lattimo which is opaque white glass. Harold Newman, An Illustrated Dictionary of Glass, London:  Thames and Hudson, Ltd., 1977.

[xviii] Marquis adheres to the whole elk theory which is the belief that if you kill an elk, you must use everything – hooves, tail, teeth, etc… He applies this concept to his glasswork.