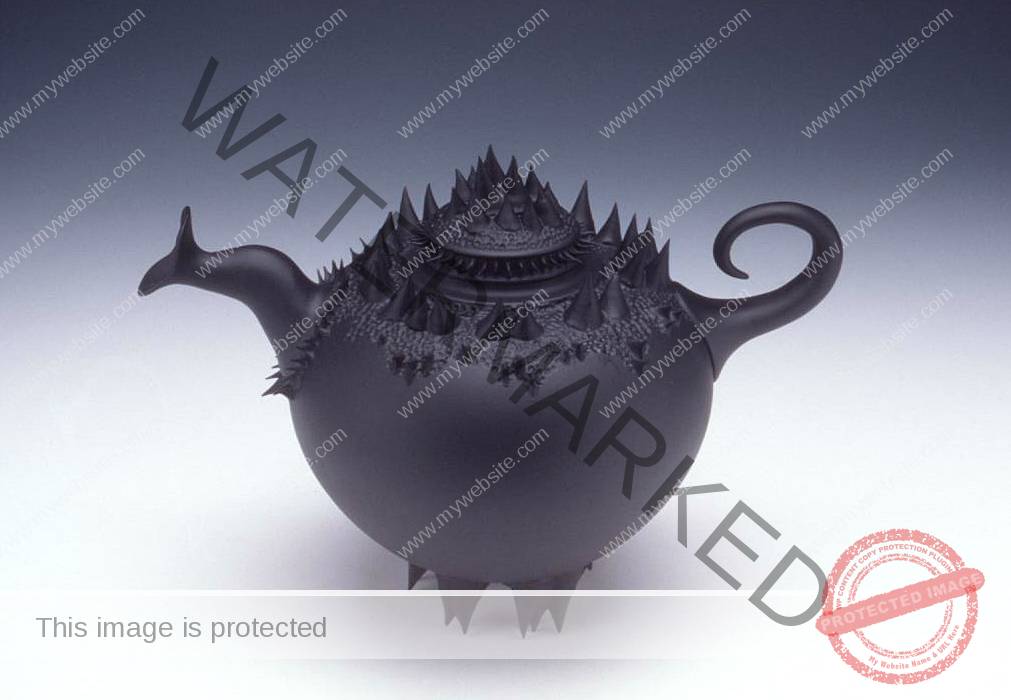 “Just realizing that I am making work that other people respond to is very motivational.”[i] -David Sengel

David Sengel is an expert in manipulating and embracing the innate qualities of his material of choice, wood. Within the Kamm Teapot Collection there are three Sengel works. Each of these vessels is alive with energy and dramatically displays the marvels of nature.

This blog post will focus on a lively, black, lacquered teapot by the artist. The form has a rounded globe-like body with a tapered curlicue handle and a curving spout. The upper surface is carved and accented with sharp thorns. These thorns also encircle the base of the spout and are utilized to create a foot. This is a whimsical work that emits a dark ominous feeling as well.

Sengel was introduced to woodwork by his father. His dad made items such as furniture in a “modest” shop in the basement of their home.[ii] Sengel remembers playing in that shop, being “exposed to the machines,” and witnessing “the transformation of the wood from raw material to finished objects.”[iii] He began his own explorations after college. For more than ten years Sengel had a piano repair and restoration business.[iv] This involved a great deal of woodwork. However, in the 1980s while searching for a creative outlet, Sengel became interested in the process of woodturning.[v] He purchased a cheap lathe out of a catalog and he “turned untutored for three years.”[vi] Yet, “[Sengel’s] technique couldn’t take [him] where[his] imagination wanted to go.”[vii] Classes with master woodturners such as Del Stubbs and David Ellsworth changed the trajectory of his work. Motivated by what he had learned, Sengel says, “I decided to push it as hard as I could.”[viii] His designs evolved from simple “…vessels and other decorative items” to larger more complicated forms that often have a strong narrative and a great deal of symbolism.[ix]

A constant source of inspiration for Sengel has been nature. His inspiration is often found during his daily walks around his home and property in the mountains of North Carolina. During these outings Sengel checks the garden, the pond, and observes the details and transformations in the world around him. These interactions might yield a new concept, material, or perhaps lead to the discovery of a bird or insect to recreate in wood. Sengel is particularly interested in the “natural destructive forces of nature. Weathering, bleaching, rusting, the sculpting by insects are all effects [he] admire[s] and sometimes [tries] to emulate.”[x]

In the 1990s Sengel began incorporating thorns in his woodwork. The idea came to him after receiving some locust thorns from an artist friend.[xi] This decision initiated an entire body of work with their inclusion. Sengel says, “I really hate to think how many thorns have passed through my hands…”[xii] These prickly additions provide an eye-catching tactile quality and have made Sengel’s work very “identifiable.”[xiii] Each thorn, which is gathered from various plant life, is sanded and meticulously adhered to the surface with tweezers. When you examine these creations, the thorns can feel menacing and their presence creates a barrier between the work and the viewer. A teapot, or especially a vessel made of wood, would normally encourage handling. However, in this instance, this norm is challenged.

Sengel often utilizes a rich, dark, black finish. To obtain this result he has applied stove paint, black wax, dyes, shoe polish, or, as seen on this teapot, a lacquer. Countless artists have preferred a monochromatic effect for numerous reasons. For some, black unifies or simplifies a composition or adds an air of mystery.[xiv] For others, it “…contain[s] all color. It [isn’t] a negation of color…black is the most aristocratic color of all…”[xv] Sengel relies on his dark finishes to set the mood, act as a symbolic gesture, or perhaps it is a way to accentuate the form.[xvi] Undeniably, the decision to darken the surface gives his artwork a powerful presence.

Throughout his career Sengel has exhibited extensively and his woodwork is featured in numerous collections including the Smithsonian Institution’s Renwick Gallery (Washington, DC), the Museum of Arts & Design (New York, NY), and the Mint Museum (Charlotte, NC). In recent years it seems that he spends his time either working in his garden or his studio.[xvii] Sengel has found a balance between the two that gives him peace.[xviii] In a 2008 publication he stated, “it is much easier these days to see what is important. Now I take more time to get out, be in, and observe the real world…”[xix]