Adolph Georg Walter Gropius (German, 1883-1969) was an innovative architect, an influential educator, and the founder of the revolutionary art school known as the Bauhaus. The Bauhaus would ultimately “reshape our world” and he was its “impresario.”[i] The school sought to reform educational theory and unify the arts by breaking the hierarchical divisions between artists, architects, and craftsmen. Gropius created a curriculum that encouraged experimentation of materials and processes, rejuvenated design for everyday life, and reunited creativity and manufacturing. “Our cities and houses today, our furniture and typography, are unthinkable without the functional elegance pioneered by Gropius and the Bauhaus.”[ii]

There was an expectation that Gropius would become an architect.[iii] Several members of his family had chosen that path.[iv] Gropius’s own “obsession with building structures” developed in school after reading Julius Caesar’s account of a bridge construction in The Conquest of Gaul.[v] Not long after, he officially began his architectural studies at the Technische Hochschule in Munich, Germany.[vi] This initial coursework was interrupted by a period of military service and a stint working for the firm Solf and Wichards.[vii] However, Gropius returned to his training in 1905 at the Kӧnigliche Technische Hochschule in Berlin-Charlottenburg.[viii] By 1908 he was employed as chief assistant in the office of the architect Peter Behrens.[ix] While he only stayed two years at this influential firm, Gropius “always [acknowledged] Peter Behrens as his master.”[x] He was “the person who introduced him to the basic working principles of architecture and design.”[xi] In 1910 Gropius went out on his own and established an architectural practice with Adolf Meyer as his assistant.[xii] Around this time he also joined the Deutscher Werkbund. This German association of artists, architects, designers, and industrialists would become instrumental in the formation of the Bauhaus as well as the development of modern architecture and design.

In 1919, following the First World War, the Bauhaus or “building house” was formed when two schools were joined, the Weimar School of Applied Arts (Weimar Kunstgewerbeschule) and the neighboring Academy of Fine Arts (Hochschule für Bildende Kunst).[xiii] Initially Gropius’s “core objective” for this innovative institution was “to reimagine the material world to reflect the unity of all the arts.”[xiv] To achieve this goal he utilized “a new model of education” and hired professors attuned to the philosophy of the school such as Paul Klee, Vasily Kandinsky, Josef Albers, Marcel Breuer, and Gerhard Marcks.[xv] In 1923 Gropius’s goals for the Bauhaus would shift. While continuing to emphasize crafts, the school began embracing mass production and it adopted the slogan “art into industry.”[xvi] Ultimately, the Bauhaus would become a cultural center “where…the ideas that would dominate art in the twentieth century clashed and became defined.”[xvii] Gropius was director for nearly ten years of its existence while the school was in Weimar and Dessau, Germany.[xviii] The Bauhaus was shut down by the Nazis in 1933.

In 1934 Gropius left Germany due to the changing political climate. First, he went to London, England where he formed a partnership with the architect Edwin Maxwell Fry. However, after three years together, Gropius decided to relocate again. Harvard University in Boston, Massachusetts had asked him to take over as chair of the Department of Architecture.[xix] At Harvard he introduced the Bauhaus philosophy of design and helped produce an impressive new generation of American architects. Gropius would remain in that position at the university until 1952 and would make the United States his home base from that point onward.

In 1945 Gropius helped found his final architectural firm with seven former Harvard pupils. [xx] It was called The Architects Collaborative (TAC) and was based in Cambridge, Massachusetts. TAC was organized in a very democratic fashion. The architects designed as a team, an approach that was reminiscent of the “collaborative spirit” at the Bauhaus.[xxi] It would become one of the largest architectural practices in America. The firm, which was active until 1995, would complete a variety of commissions including the Harvard Graduate Center (1948), the United States Embassy in Athens, Greece (1957), and the Rosenthal Ceramic Factory in Selb, Germany (1965). 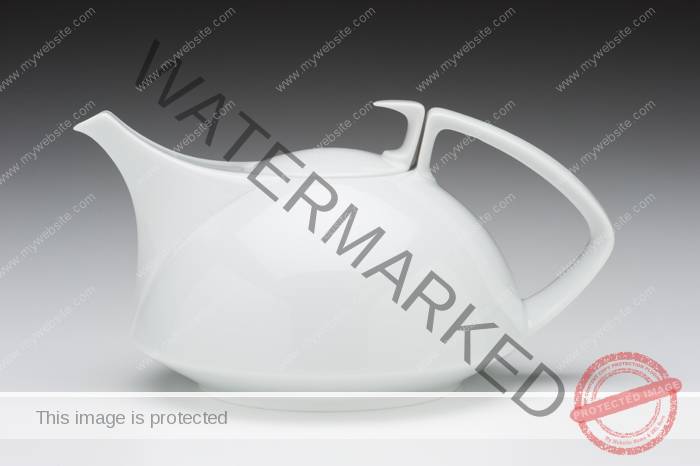 Gropius and his TAC collaborators, architect Louis A. McMillen (1916-1998) and designer Katherine De Sousa (b. 1945), were tasked with creating a tea and coffee service for Rosenthal following the factory project. From this service, a “design classic” was born. [xxii] The vessel, known as the TAC 1 teapot, has a sleek domed body, a short flaring spout, and a curved handle that echoes the shape of its form. Like its Bauhaus predecessors, this teapot exudes a sense of elegance, simplicity, clarity, and functionalism. In essence, there is a timeless modernity to it even though it was first produced almost sixty years ago.[xxiii] Since 2000 the Kamms have collected six of these porcelain TAC teapots. This selection includes solid white and black examples as well as works that pay homage to Gropius such as Hearts Teapot which is decorated by the artist Paul Giovanopoulos (1994) and Derevolution Teapot by Sergei Bugaev (1994).[xxiv]

TAC 1 was not Gropius’s first attempt at designing a teapot. He had created an aluminum electric teapot while working in London. However, in this later example, Gropius “added another touch of functional bliss.”[xxv] He created what he called a “lid arrestor.”[xxvi] Essentially this development allowed the teapot to be poured with one hand. When one’s thumb is placed on the arrestor, which is a simple tab on the handle, the lid of the teapot stays perfectly in place while pouring. TAC 1 was first produced in 1969, the year of Gropius’s death. However, the Rosenthal company continues to manufacture versions of this teapot today along with dinnerware inspired by Gropius’s original designs.[xxvii]

[iii] It was assumed Gropius would become an architect and work in the formal Schinkel mode. Karl Friedrich Schinkel was close with the Gropius family. Schinkel would become a renowned architect designing many of Berlin’s civic buildings. MacCarthy, 14.

[iv] His father Walther Gropius (1848-1911) had started out pursuing a career in architecture before becoming a public servant. Also, his great uncle Martin Gropius founded the firm Fa. Gropius & Schmieden which was one of the largest architectural firms in Berlin.

[vii] During his military service Gropius was part of the 15th Hussars stationed at Wandsbeck near Hamburg. A great deal of his training focused on horsemanship. Gropius’s first architectural commission was to design some farm buildings in 1905. He was at the Technische Hochschule in Berlin from 1905-1907.

[ix] Peter Behrens office was in Berlin. There is a metal coffee and tea set in the Kamm Collection by Behrens. It was produced in 1904 by Eduard Hueck Gmbh & Company of Lüdenscheid, Germany.

[xii] Gropius left the office of Peter Behrens after an error was made during a building’s construction. His architectural practice with Meyer was in Neubabelsberg, Germany and then later in Berlin.

[xiii] The full name of the school was Staatliches Bauhaus which translates to Bauhaus State School. During the First World War (1914-1918) Gropius was on active service in the German Army. The two schools that formed the Bauhaus were both originally based in Weimar, Germany.

[xviii] The Bauhaus relocated from Weimar to Dessau, Germany in 1925 followed by Berlin in 1932. Gropius stepped down as director in 1928. Architect Hannes Meyer succeeded him.

[xix] In 1934 Gropius succeeded in recruiting Marcel Breuer to join him as a faculty member at Harvard. The two would work closely together at the school and from 1937-1941 the pair formed a partnership in Cambridge, Massachusetts. They primarily designed private homes such as the Alan I W Frank House in Pittsburgh (1938) which combined a rich range of natural materials “with a mix of curves and angles.”[xix] This commission led to the design of the 1939 Pennsylvania State Pavilion at the World’s Fair in New York. MacCarthy, 375.

[xxiv] While researching for this blog post, I found another example of an homage to Gropius on a TAC teapot from 1994. However, I was unable to determine if this was an organized official series.

[xxvii] The Rosenthal website states that designs for a table service were discovered “in a drawer of the product development department.” It is unclear whether that was at Rosenthal or at TAC. The designs, however, serve as the “model for the current TAC 2 program” at Rosenthal. https://www.rosenthal.de/enie/collections/dining-collections-/tac/white, 20 October 2022.