“Throughout his career, Clayton Bailey’s art always leaned more toward flames than flowers…From the 1950s until his death in June 2020, Bailey embraced the strange, crafting works of art that fit as neatly in a carnival side show as a high-end art gallery.”[i] – B.J. Hollars

Clayton Bailey (American, 1939-2020) is often “…credited as being the zaniest” of the Funk artists as well as a leader in the Nut Art movement.[ii] His works, which are playful, humorous, irreverent, and at times socially critical, are highly regarded, especially within the ceramics community.[iii] Over the course of his lengthy career “he created hundreds, if not thousands, of objects” that ranged from gargoyles and burping bowls to ray guns and working life-sized robots.[iv] Bailey is also known for his legendary Wonders of the World Museum, which was curated in conjunction with his alter ego, Dr. George Gladstone. The museum featured a collection of oddities including a Mad Doctor’s Laboratory and Bailey’s mythical kaolithic fossils (fossils made of thermally metamorphosed mud). In essence, the Wonders of the World Museum allowed audiences to dive deeper inside the mind of this skilled artist and legendary prankster.[v]

Bailey’s initial interest in art began with a love of comics and Mad magazine.[vi] However, when Bailey enrolled at the University of Wisconsin, Madison in 1957 he first decided to focus on chemistry. His plan was to become a pharmacist, but everything changed after taking a ceramics class. After “touching the clay,” Bailey said he knew he needed to switch his major.[vii] He would go on to receive a Bachelor of Science degree in art education in 1961, and in 1962 he graduated with a Master of Science in art and art education. While in Madison, Bailey studied ceramics under Harvey Littleton, took workshops from Bernard Leach and Peter Voulkos, and in the summer of 1959 he trained with Toshiko Takaezu.[viii] However, even early on he resisted a traditional approach. Takaezu once stated that, “…[Bailey] is one of the few individuals that I know of who used clay as a medium for a somewhat bizarre expression of his art, and of himself. He didn’t care what others were doing…”[ix] While at the University of Wisconsin, Bailey largely concentrated on creating ceramic works that were “quickly-made” and “emphasize[d] the process of their formation by pinching, squeezing, and poking the soft clay.”[x]

Bailey spent the first part of his life in the Midwest. However, in 1967 he came to the University of California, Davis to teach while Robert Arneson took a leave of absence. This experience convinced Bailey that the Sunshine State with its “frenetic art activity” “was the place to be.”[xi] Initially he moved into a vacant building in the small town of Crockett, California called Dairyville Café.[xii] In typical Bailey fashion, he adorned the booths of the storefront windows with his ceramic “freaky people” busts which garnered a great deal of attention.[xiii] Eventually he and his family would settle into a house between Crockett and another small town called Port Costa.[xiv] This rural setting would become Bailey’s home and studio for the next fifty years. In 1968 he began working at California State University, Hayward.[xv] Bailey would teach there until 1996 when he retired Professor Emeritus.

In the 1970s Dr. Gladstone, Bailey’s alter ego, made his appearance and thus began a performance piece that lasted three decades.[xvi] Dr. Gladstone was an “adventurer, paleontologist, archaeologist, anthropologist, curator, and showman wrapped into one.”[xvii] This Barnum-like persona allowed Bailey to explore not only his interest in the tabloid genre, but also live out his childhood dream of being a “dinosaur hunter.”[xviii] Dr. Gladstone made “discoveries” such as the burial ground of Bigfoot or the bones of a giant sea serpent. These kaolithic findings were reported in a sensationalized fashion complete with photographs of the creatures displayed at the “dig sites.” In some instances, actual newspapers picked up the stories much to “Bailey’s great delight.”[xix] His fossils were of course his own creations as well as the instruments he utilized to “find” them such as Fossil Tester and Kaolithic Fossil Detector. These objects were convincingly displayed along with other examples of his “unnatural historical specimens” at his notorious museum.

The Wonders of the World Museum, which first started as a backyard collection, relocated in 1976. The new location was a late-nineteenth century warehouse in downtown Port Costa. [xx] Bailey and Dr. Gladstone mimicked traditional museum practices producing tickets, interpretative materials, catalogues on the objects, and even an impressive grand opening poster. The Wonders of the World Museum in Port Costa was only open for two years. After its closing, all the contents returned to Bailey’s backyard.

The Kamm Collection has three Bailey works:  Celeste the Robot Tea Bag, Robot Teapot, and Mad Doctor tea set. These works remind us that “humor and its expression are Bailey’s true subject.”[xxi] It was an always present force in his work. While Bailey certainly “mastered the good-natured hoax,” his humor had the ability to not only make us think, but also simply laugh at a mischievous or juvenile joke. The examples in the Kamm Collection lean more towards the latter.

Celeste the Robot Tea Bag, which features a figure sitting inside a cup, is made from a range of found metal objects. Bailey began assembling robots in this fashion following his 1976 creation called ON/OFF. ON/OFF was created to help urge people on the streets of Port Costa to come visit the World of Wonders Museum. Essentially it was a metal suit that Bailey or his son would wear and operate. After ON/OFF, he would search flea markets and scrap metal yards for found objects which would be transformed into robotic sculptures that resembled humans or animals.[xxii] For Bailey this process was “… reincarnation. Teapots, coffeepots, toasters, refrigerators, vacuum cleaners are all primitive robots; machines working for man. [He] just reassembl[ed] their parts, like nature reassembles materials in a compost pile, and [came] up with new beings.”[xxiii]

This fascination with mechanical devices spilled over into Bailey’s work with clay. Robot Teapot, which is made of earthenware, reflects this trend. The dark gray glazed form features a robot with his arms raised. Relief modeling on the surface provides glimpses at the machine’s innards which are surprisingly human as well as mechanical. Bailey cleverly described Kamm’s Robot Teapot as “a solid-state ceramic device that prepares tea automatically. Just add hot water and tea, and in a few moments, you can pour a delicious cup of hot tea. It’s rust proof and heat resistant, no electricity is required.”[xxiv]

Bailey’s Mad Doctor tea set reflects his ongoing fascination with characters such as the demented scientist, sadistic dentist, and the homicidal surgeon. [xxv] He imagined Dr. Gladstone as one of these men. With works like this tea set, Bailey could explore a stereotype that had “brewed in his mind ever since he read the earliest issues of Mad [magazine].” He featured Dr. Gladstone’s Mad Doctor’s Laboratory in the Wonders of the World Museum and investigated this topic numerous times in clay. At a young age Bailey thought he might become a doctor. That did not happen. In essence, the mad doctor series allowed him to “practice medicine in mud.”[xxvi] While some of these works can be gruesome, the Kamm’s example is reserved. It features a teapot in the form of a mad scientist, three cups that look like beakers, and a tray with a Bunsen burner attached.

In 2011 the Crocker Art Museum in Sacramento, California had a retrospective called Clayton Bailey’s World of Wonders. This exhibition shared fifty-years’ worth of his work. Following his death in 2020, the organization Curated Storefront acquired a large portion of the artist’s collection from his estate and displayed the works at the Landmark Building in downtown Akron, Ohio. Currently a portion of that collection is on view through September 3, 2022, at the Lynn Rodeman Metzger Galleries at the University of Akron’s Cummings Center for the History of Psychology.

[vi] Bailey especially enjoyed the comic Don Martin who worked for Mad magazine from 1956 to 1987.

[viii] Bailey was present at Littleton’s Toledo Art Museum summer workshop of 1962 which launched the studio glass movement. He was also Littleton’s technical assistant at the University of Wisconsin, Madison.

[xii] The city of Crockett is 28 miles northeast of San Francisco.

[xiv] Bailey married Betty Graveen in 1958. They would have two children together.

[xxii] Bailey’s robots were low functioning. However, some did light up or play music. 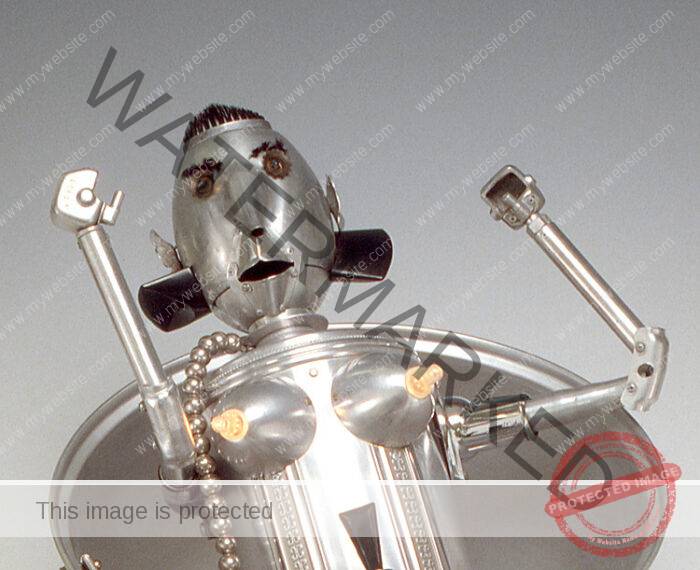